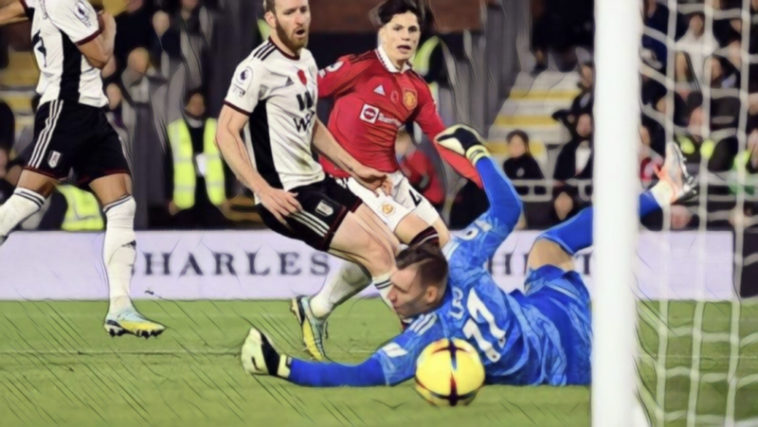 Manchester United go into the World Cup break in fifth position in the Premier League table after they secured a last-gasp win away at Fulham today.

Erik Ten Hag’s side took the lead after just 14 minutes when Danish midfielder Cristian Eriksen slid in at the back post to steer a Bruno Fernandes cross/shot home for his first Manchester United goal.

Fulham – missing talisman Aleksandar Mitrovic through injury – began to gain a foothold in the game as the first half wore on with Harry Wilson stinging the palms of United ‘keeper David de Gea via an effort from the edge of the area.

Man United continued to look much more threatening in attack and both Anthony Martial and Eriksen really should have put their side further ahead just before half-time.

Ten Hag’s side found it easy to get in behind Fulham’s defence all day and soon after the break Anthony Elanga forced Bernd Leno into a one-on-one stop before the German ‘keeper managed to deflect Marcus Rashford’s follow-up effort around the post.

It would soon be De Gea’s turn to show his quality with the Spaniard pulling off two superb close-range stops to stop Vinicius and Tim Ream.

Just after the hour mark, United would be made to pay for their wastefulness in front of goal, when a counter-attack ended with former Red Devils man Dan James steering home a Tom Cairney cross from a few yards out.

Both teams pushed on in search of an equaliser but after substitute Scott McTominay headed over from the edge of the six-yard area it looked as if the game would end all square.

However, United’s teenage superstar in the making, Alejandro Garnacho popped up in injury time to score a hugely important winner for his side. The 18-year-old Argentine picked up the ball wide on the left before driving forward menacingly and swapping passes with Eriksen before showing electric pace to race into the area and slide a clinical finish into the bottom corner.

Two winning goals and two assists in one week 👀

Argentina are leaving a talented youngster at home in Alejandro Garnacho 😬 pic.twitter.com/xLNYcN6MrR

Speaking afterwards Man United boss Ten Hag was delighted with how is team kept going until the end.

“I think in the first half we played quite well and I think we had to score more goals. The difference between us and Fulham had to be bigger after the first half,” Ten Hag told BBC’s MOTD.

“We were only 1-0 up and then a great chance after half-time. And then you see that two halves are never the same and the game changes. Fulham get better and better and more dominant, create chances and get the equaliser.

“The last 10 minutes were then ours. I’m really happy with the resilience we have. Also the composure you can bring in the game then.

“The winning has to do with the belief that you can always score. I’m really happy that a sub came in once again – it’s not only 11 players, you need a squad to win trophies and that is what we want.”