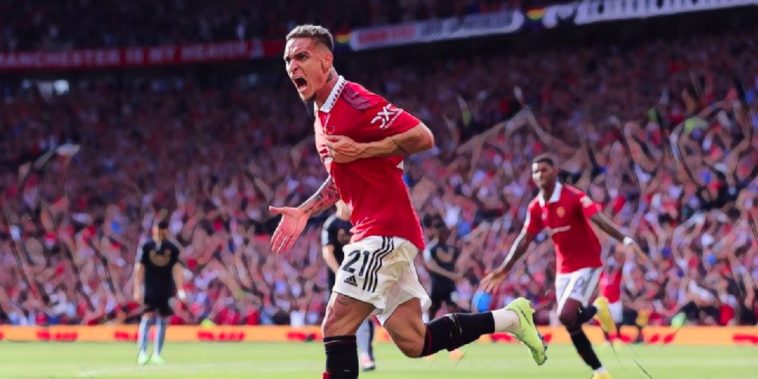 After their absolutely atrocious start to the season – even by their own diminished standards – Erik ten Hag’s side had managed to grind out three successive wins coming into this fixture, where they would meet an Arsenal side who had kicked the campaign off with five successive victories.

It was Manchester United who settled into the game by far the quicker of the two sides and dominated during the opening 15 minutes. However, it was Arsenal that appeared to strike the first blow, catching United in possession before releasing Gabriel Martinelli down the left who clipped it over David de Gea. In a weekend that has been dominated by VAR drama and criticism, the referee was advised to consult the pitchside monitor, where he eventually decided the initial turnover in possession was a foul, with Martin Odegaard not getting any contact on the ball during his challenge on Christian Eriksen.

That decision did, however, turn the flow of the game on it’s head, with Arsenal starting to dominate possession and Martinelli forced a fine save out of David de Gea on the half-hour mark.

In the blink of an eye though, the momentum swung once more, a sumptuous Christian Eriksen ball dissecting the Arsenal midfield, before Bruno Fernandes, Jadon Sancho and Marcus Rashford combined – the latter laying it off to find the unmarked Antony, who kept a cool head to slot home on his debut.

The Gunners again started by far the brighter in the second half, and they scored a goal that the quality of their football deserved, Odegaard threading the ball in-towards the lively Gabriel Jesus, and while the Brazilian was challenged in the box, the ball fell kindly to Bukayo Saka who fired into the back of the net.

Manchester United really struggled to get a foot on the ball at times, but in the 66th minute, the Red Devils clinically hit on the counter. Marcus Rashford latched onto an inch-perfect Bruno Fernandes through-ball, before slotting past Aaron Ramsdale into the bottom corner, his effort taking a potentially vital deflection from Ben White’s attempted challenge.

🏆Player of the Match – @ChrisEriksen8

Rankings for @ManUtd in today's game:

Fernandes then played a superb ball to release Eriksen in behind the Arsenal backline to create a two-on-one against Ramsdale with 15 minutes to play, the Denmark international squaring it to Marcus Rashford who stroked home his second of the game to make it 3-1.

Speaking after the game, Erik ten Hag thought his side produced their best football of his tenure during the opening period, while praising his side’s ‘team spirit’.

“I thought the first 10 minutes was the best we have played so far this season,” he told Sky Sports. “But after the cancelled goal it wasn’t as good. But we had a good team today, good team spirit, they fought, they recovered, Arsenal created chances but we scored great goals, we were great on the break.”

Asked if he was worried about Arsenal’s dominance, the Dutchman admitted there is still ‘a lot of room for improvement’, but was pleased with how his side worked as a team.

“Not worried, I know our defence can deal with that but they have a lot of creativity. We could’ve done things better but we are not as long together as Arsenal. When we get that in we will have better control of the game, that’s hard work, there’s a lot of room for improvement.

“We had a good plan, we didn’t get it all on the pitch, we couldn’t control it when we should have. We got a set back and we fight back, that’s good to see. I like this mentality.

“Arsenal played well but we defended well – I never had the feeling that they’d break us. They had a lot of movement and creativity but we defended as a team with all 11. We can have better pressing and organisation, we can control the game more, we can be better in possession with better composure n the ball then we will dictate the game even more. We haven’t been together long so we’ll work on it.”

Having netted on his debut, Ten Hag said he felt £85 million signing Antony was the ‘missing link’ on the right side of his attack, before again driving the message of improving the side’s standards.

Antony for Man Utd in the first half vs. Arsenal:

“We can make speed and creativity together, he will be a threat in the Premier League. We were missing a player on the right wing, [Jadon] Sancho and [Marcus] Rashford can play there but they prefer the left so now we have the missing link who can play well on the right. He did well but I think he can do better, he had a great goal but all the goals were team goals.

“It’s a process – you have to lift the standards every day. That is my demand and the players in our team have that demand, we have many players in the team who have won trophies and they have to bring that standard. Get the best out of them every day.

“We have to think about Europa League – today we will have a short celebration and tomorrow focus will be on the next game.”