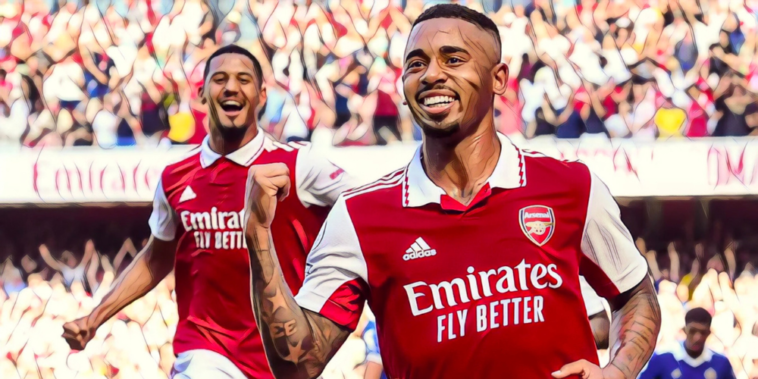 Manchester United take on Arsenal in the Premier League this weekend, a clash between two teams who once dominated the division.

After a decade of decline for both clubs, each appear to be on the rise under managers keen to restore the old rivals to past heights. United have won three games in a row as Erik ten Hag’s reign has got up and running after a shaky start, while Arsenal will arrive at Old Trafford as the Premier League leaders.

Ahead of the clash, we look through both squads and compile our Manchester United vs Arsenal combined XI.

Since then the 24-year-old hasn’t looked back. He kept 12 clean sheets last season and brought an aura of calm to the Gunners backline, while his distribution was an upgrade on Bernd Leno.

Ramsdale’s ability with the ball at his feet gives him the edge of David de Gea in our combined XI, who – despite being an elite shot-stopper at his best – lacks the all-round game required as a top-six goalkeeper.

Improving with each performance of late, Erik ten Hag has settled on Diogo Dalot as his first-choice right-back this season.

Dalot arrived with a promising reputation from Porto but has so far failed to fulfil his potential, but he has produced a string of encouraging showings during United’s recent winning run.

Dalot provides enterprise down the right flank and has shown signs of defensive improvement, including a fine defensive performance in the win at Leicester. He made four tackles and won 100% of his duels, while a brilliant block late on drew a roar of approval from the away fans.

With Takehiro Tomiyasu yet to return to full fitness and Ben White operating as a makeshift full-back, Dalot earns a starting spot in our combined side.

William Saliba has made an immediate impact since stepping into the Arsenal side this season, with the centre-back having proved worth the wait.

The Gunners have taken a patient approach to Saliba’s development with three successive loan spells, but after winning Ligue 1’s Young Player of the Year award last season he has returned ready for the Premier League.

Integrated into the starting side, he has formed a fine understanding with Gabriel at centre-back. Composed and cultured with a fine passing range, he has all the attributes to be one of the division’s leading defenders.

Raphael Varane’s return to form and fitness has been a driving factor behind Manchester United’s improvement with the Red Devils having won three straight games since his return to the starting side.

United failed to see the best of the four-time Champions League winner last season, but Varane’s cool head and composure has been evident in recent weeks.

His presence has brought the best from summer signing Lisandro Martinez and the duo have the makings of an impressive partnership. There are few defenders anywhere in world football with Varane’s nous or record of winning major trophies.

Manchester United have won every game they've played with Varane and Martinez at the back 🧱 pic.twitter.com/yCV64t8EW9

Zinchenko has proven a smart pick-up for Arsenal this summer, who spotted a chance to provide the Ukrainian with more minutes than he had become accustomed to at Manchester City.

The 25-year-old is an intelligent footballer whose versatility makes him suited to different formations and tactical plans, providing Mikel Arteta with a multi-functional weapon down the left.

Already this season we’ve seen Zinchenko impress both on the overlap and coming inside into midfield, a very modern full-back who has already proven popular at the Emirates.

Manchester United have ended their search for a midfield enforcer this summer, securing a deal to sign Casemiro from Real Madrid.

There have not been many more successful defensive screens in European football across the past decade, with Casemiro a five-time Champions League winner as part of an iconic midfield trio alongside Luka Modric and Toni Kroos.

The Brazil international could make his first start for the Red Devils against Arsenal, where he will be tasked with providing both a combative and calming presence at the base of the midfield.

A serial winner who snuffs out danger and helps exert control, he will have a major influence on United’s season.

Another former Real Madrid man, there might just be a sense of regret at how easily Martin Odegaard was allowed to leave the Spanish capital.

Backed for stardom since moving to the Bernabeu as a teenager, he struggled to make an impact at Real Madrid and signed for Arsenal in a £30m deal last summer, following a successful loan.

Since then the Norwegian has grown in influence and was named as club captain ahead of the 2022/23 campaign. Odegaard is maturing into the role and has been excellent so far this season, including a brilliant performance in the comeback win over Fulham in which he grabbed the initiative.

Our captain was everywhere yesterday ⚡⚡⚡

💬 "He has influence and in the difficult moments, he takes the ball and makes things happen."@m8arteta on Martin Odegaard ❤️ pic.twitter.com/YWz9LGTQgK

Effortlessly inventive in his role as the club’s chief creator, he combines that creation with a hustle out of possession and appears to be getting better and better with each performance. If Arsenal are to secure a top four finish – or better – this season, he will be a central part of their success.

Bruno Fernandes is edging closer to his brilliant best, with the midfielder having captained Manchester United to three consecutive wins.

Fernandes has taken the armband in the absence of Harry Maguire and has relished the responsibility, producing improved performances in wins over Liverpool, Southampton and Leicester.

After scoring the winner against the Saints he shone in a hard-fought victory at Leicester, with his three chances created a game-leading total.

In a league of his own. 🇵🇹👑 pic.twitter.com/LJCbEBLqPb

No midfielder has scored more Premier League goals than Fernandes since his debut in the competition and coaxing his best on a consistent basis will be high on Erik ten Hag’s agenda.

The poster boy of Mikel Arteta’s rebuild at Arsenal, Saka continues to enhance his reputation as one of Europe’s brightest young talents.

Last season the 20-year-old was the only member of the Arsenal squad to feature in all 38 league games on his way to being crowned the Gunners’ Player of the Season. He made 43 appearances in all competitions, in which he scored 12 goals and provided seven assists.

The Hale End graduate has shouldered responsibility since his initial emergence into the side and ranks second in the Premier League for carries into the penalty area so far this season.

Explosive, exciting, and getting better.

Gabriel Martinelli is one of the first names on the Arsenal team sheet at present, with the forward having put his fitness problems behind him to make a major impression.

Tenacious, talented and unplayable at his best, he has scored three goals in five league fixtures this season and shown a fine understanding with summer arrival Gabriel Jesus.

Oleksandr Zinchenko was full of praise for the 21-year-old this week and backed Martinelli to reach the very top.

“He is the special one. From the first days when I’ve seen his footwork and his attitude and the way he works. Honestly, this guy, if he is going to keep going, remember his name. He’s unbelievable,” the Ukrainian told a live feed from Fabrizio Romano on transfer deadline day.

Gabriel Jesus has transformed the Arsenal forward line this season, proving one of the most astute signings of the transfer window.

Often overlooked at Manchester City, he has revelled in main man status at Arsenal and has six goal involvements (3G / 3A) in just five Premier League appearances for the Gunners.

Less tangibly, his work-rate in and out of possession has set the tone for Arteta’s fast-improving side as the north Londoners have opened the season with five consecutive wins.

On current form, he is leading the race to be Brazil’s number nine at the World Cup in Qatar this winter.