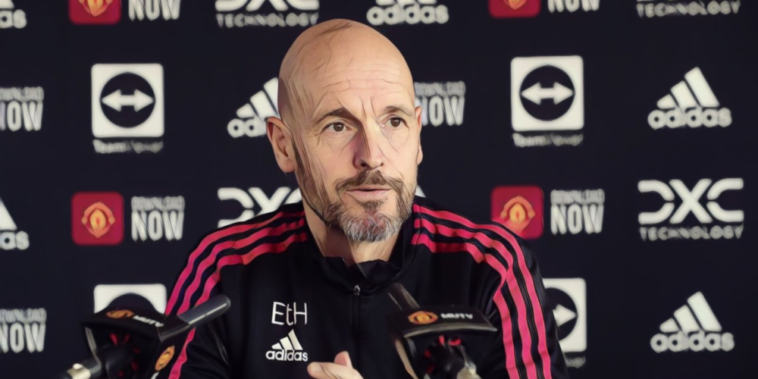 Erik ten Hag has urged his side to be ‘brave’ and will ‘demand’ his side play to their maximum in tomorrow’s Manchester derby, as he recalled the two teams’ last meeting.

United host City at Old Trafford in Saturday’s early kick off, with the Red Devils having propelled themselves into the top four.

Last time the two teams met, City ran out 6-3 winners in a result that actually flattered United as they scored twice late on to salvage a semblance of modesty, and Ten Hag urged his side to be ‘brave’ ahead of this weekend’s meeting.

“We have to prove that [we have improved] tomorrow on the pitch. Last time we didn’t do well and we have to do it better,” Ten Hag said at his pre-match press conference. “It has been a process in the last months where we have developed.

“We have to be brave, have to believe and have to play our game.”

Ten Hag said that the defeat in early October was a ‘lesson’ to his side, though feels they have made plenty of progress since that game.

“It was a lesson, we took the lesson and from that point on we have made huge progress.”

“I think that game was a setback, it is always about you have to act, to deliver,” he added.

“You have to go through certain steps, you need a clear vision, a clear point where you want to go…a direction. Then it is about development.”

A win could see United move to within a point of the reigning Champions, though the Dutchman wasn’t getting carried away with his side’s recent progress.

“It is January and we are not even halfway [in the season]. It is a long way, so it is in this period of the season that you have to get in your position to win trophies at the end of it.”

City were dumped out of the Carabao Cup at the hands of a struggling Southampton side in midweek, while United have won nine games on the bounce, though when asked if it was a good time to play their cross-town rivals, Ten Hag said he will ‘demand’ his side put in their best performance.

“I don’t look, and of course we notice, that they had a setback.

“I have seen the past weeks many games of theirs. But we have to look at ourselves, we have to play our best game.

“That is what I demand tomorrow from my players. Togetherness with full belief, not naive.”