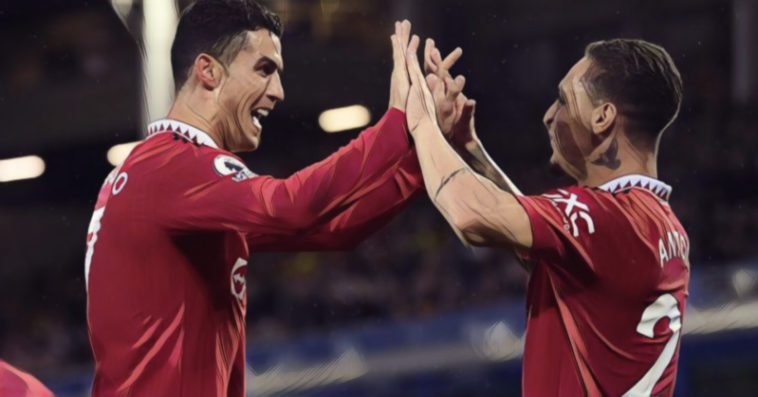 Manchester United climbed back up to fifth in the Premier League table after securing a hard-fought 2-1 win over Everton at Goodison Park this evening.

Frank Lampard’s side got off to the perfect start when Alex Iwobi put them ahead after just five minutes. Casemiro – starting his first Premier League game – was caught in possession and after Everton worked it to Iwobi, the Nigeria international curled a brilliant effort past David de Gea from the edge of the area.

10 minutes later and Man United would draw level, Erik Ten Hag’s men pouncing on some sloppy play from Everton in the centre of the park, Anthony Martial played Antony in and the summer signing confidently clipped the ball over Jordan Pickford’s dive.

Brazilian midfielder Casemiro had the chance to redeem himself for his role in the opener, but the 30-year-old headed a brilliant cross from Marcus Rashford wide of the post from six yards out.

Casemiro’s tumultuous evening continued on the stroke of half-time when he once again lost possession in a dangerous area, this time to Iwobi. However, the £60 million man immediately regained the ball and played a pass in behind to his former Real Madrid teammate, Cristiano Ronaldo, and the Portuguese superstar finished clinically for his 700th club career goal.

Cristiano Ronaldo adds another historic landmark to his name 🐐 pic.twitter.com/XqSH3LOWgL

Ten Hag would have been worried that his side’s sloppiness in the final third would be punished as the second half went on, with the Red Devils so often lacking quality with their final ball.

Rashford did think he had killed the game with 10 minutes left, although his breakaway goal was ruled out for a handball in the build-up.

Lampard brought on Dominic Calvert-Lewin and Solomon Rondon and while United had to withstand some late aerial bombardment they held out for a much-needed three points.

Speaking afterwards United boss Ten Hag was pleased with many aspects of his side’s performance as he continues to implement his footballing philosophy.

“We wanted a reaction [from the Man City defeat].” Ten Hag told BBC Sport. ”We got it already in Cyprus and we had to finish this week good and we did. We develop as a team. We have steps to go. There’s room for improvement but the first half was quite good. We controlled the game in and out of possession.

“I’m really happy. A long time since Man Utd came back from a setback with a goal to win the game. That’s good for belief in this team that they can do it.

“Twice In three days we have to stay composed and stick to the plan and see what can happen. An unlucky situation can change a game but it can’t change the plan. You still have to come back. That’s what happened today and on Thursday.

“You never get everything [right in a game]. Footall is a game for mistakes. We had really good situations in the game. You could see the principles of how we want to play. We made a good goal out of transition twice.

“I was also happy with the subs coming and making an impact.