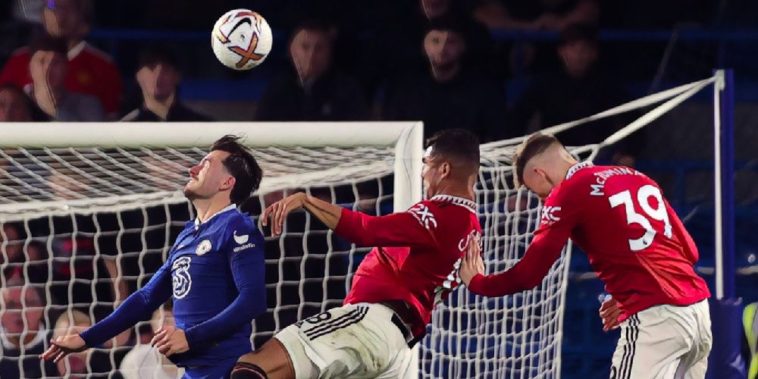 Casemiro scored a superb stoppage-time equaliser as Manchester United came from behind to earn a point against top-four rivals, Chelsea.

It was Manchester United who dominated the early stages of this contest at Stamford Bridge, with Anthony and Marcus Rashford both having decent chances to open the scoring.

Such was United’s dominance, Chelsea boss Graham Potter made a first-half tactical substitution, switching to a back four by removing defender Marc Cucurella in place of Matteo Kovacic, the move allowing the Blues to get more of a foothold in midfield.

Erik Ten Hag responded in the second half by bringing on Fred in place of the ineffective Jadon Sancho, the changes resulting in a game that neither side really were able to dominate.

With six minutes to go, however, Chelsea would be handed a gilt-edged chance to snatch all three points, substitute Scott McTominay being caught holding Armando Broja at a corner, leaving Stuart Attwell with no choice but to point to the spot. Chelsea’s regular spot-kick taker, Jorginho, stepped up and produced his trademark skip, before sending David de Gea the wrong way.

There would however be one final twist as Manchester United managed to grab an equaliser in the 93rd minute, summer signing Casemiro producing an absolutely fantastic looping header to beat Kepa Arrizabalaga’s best efforts, the goal decision system confirming the latest draw between the two sides – the 26th time in the Premier League that this fixture has finished all-square.

Casemiro's game by numbers vs. Chelsea:

Speaking after the game, Erik ten Hag was delighted with his side’s ‘spirit’ after falling behind late in the game, though said his side should have made their first-half chances count.

“I have to make a big compliment to my team,” he told BBC Sport. “To fight back with a fourth game in 10 days, you see the spirit and how they deal with setbacks. Really good.

“We dictated the game and I am happy with that. If you concede a goal late it is difficult.

“I think it is a fair result. I would have been disappointed if we had gone without a point because we didn’t deserve that. At the end of a tough week to come here, you bring the point home.”

One negative for United was an injury to Raphael Varane in the second half, the defender seemingly in tears as he left the field at the prospect of potentially missing the upcoming World Cup.

“It is difficult to say how it is now because it is so soon after the game,” Ten Hag said of the injury. “We have to wait 24 hours and then we will know what it is.”

The result leaves Chelsea fourth on 21 points with Manchester United a point further behind in fifth.