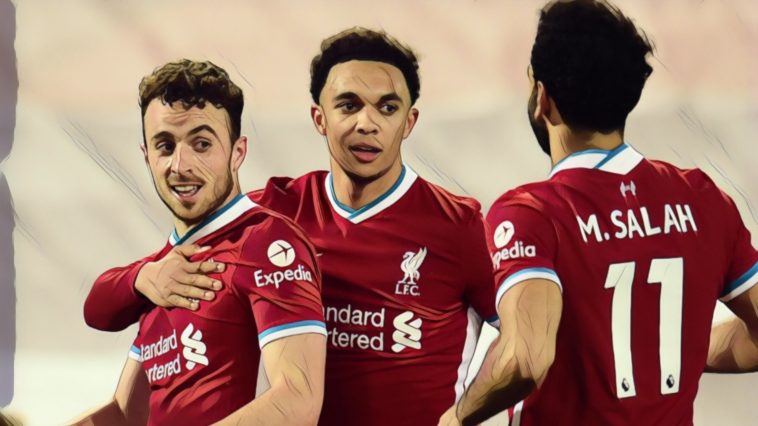 Premier League seasons aren’t run over a calendar year but as 2020 draws to a close it’s always interesting to look back at the statistics over the past 12 months of action.

Which teams in England’s top tier have enjoyed a memorable year, and which have struggled to find their form over the course of an unprecedented and unforgettable 2020.

We’ve looked back at the stats to see which teams would make up the Premier League’s top six based on points won throughout the calendar year:

Sneaking into a Europa League position are Jose Mourinho and Tottenham, whose 55 points from 33 fixtures sees them finish narrowly above seventh-placed Everton (53 points) and Arsenal in eighth (52 points).

Mourinho took charge of the north London side in November 2019 with the club languishing in the bottom half of the division, though greater consistency over the first half of 2020 saw Spurs eventually finish sixth and secure European football.

After finishing the 2019/20 season strongly Spurs invested during the summer on a host of signings, their recruitment drive including the arrivals of Pierre-Emile Hojbjerg, Sergio Reguilon and former favourite Gareth Bale.

Mourinho’s side began with a disappointing defeat to Everton on the opening day of the campaign before bouncing back to compile an 11-game unbeaten run, securing memorable victories over both Manchester sides to take an early lead in the Premier League title race.

Their fortunes have wobbled over the festive period with no win in their past four fixtures to drop to seventh, though Mourinho’s sights will be firmly set on a top four finish and Champions League football over the first half of 2021.

Ralph Hasenhuttl’s impressive work at Southampton continues with the Saints having made huge progress over the calendar year, enjoying a superb second half to the 2019/20 season after flirting with relegation before the New Year.

Southampton began 2020 with a 1-0 win over Tottenham on January 1 before beating Leicester in their next league fixture, the momentum gained from those victories moving the club away from danger.

Hasenhuttl’s outfit finished the season with a seven-game unbeaten run and have begun the current campaign in fine fashion, sitting just three points adrift of the Champions League places in the most competitive division in recent memory.

Southampton have wobbled of late in similar fashion to the aforementioned Spurs, though the club’s board are undoubtedly reaping the rewards of their faith in Hasenhuttl following a difficult spell last season.

Only four Premier League sides have taken more points than the Saints throughout 2020 and if they can maintain those levels of consistency a return to European football perhaps beckons.

Chelsea remain a difficult side to assess under the guidance of Frank Lampard with encouraging signs mixed with familiar flaws, the west London side edging out Southampton by just a single point to the make the Premier League’s top four in 2020.

Lampard won plenty of plaudits during a debut season in which he guided the Blues to a top four finish and FA Cup final, his navigating of a transfer ban and integration of several academy graduates into the first-team winning admirers.

Securing Champions League football saw owner Roman Abramovich choose to accelerate Chelsea’s development under the novice manager, however, handing Lampard over £220m to splash on a host of new recruits.

That summer recruitment drive has significantly raised expectations but Lampard’s Chelsea remain very much a work in progress, stuttering over the festive period with just four points from their past five league fixtures.

Just three sides have taken more points than Chelsea throughout the course of the calendar year, though they remain some way short of the division’s best.

Manchester United will head into the New Year sitting second in the Premier League, the club’s last-gasp victory over Wolves on Tuesday moving the Red Devils within just two points of league leaders Liverpool.

It’s a remarkable achievement for a side whose consistency has often been questioned, though Ole Gunnar Solskjaer’s side rank third in the Premier League for points won in 2020, racking up 65 points from 33 games played.

United’s fortunes have largely been transformed following the signing of Bruno Fernandes last January, the midfielder having been arguably the division’s best player since making his Premier League bow.

Fernandes’ has provided a staggering 32 goal involvements in just 29 league appearances, whilst the Red Devils finished the 2019/20 campaign with a 14-game unbeaten following his mid-season arrival.

Bruno Fernandes for Manchester United in 2020:

Solskjaer’s side struggled in the early weeks of the current campaign with home defeats to Crystal Palace, Tottenham and Arsenal, but have since bounced back to compile a nine-game unbeaten run – including seven wins – to move second in the division.

Manchester City finished as runners-up in the Premier League last season and are second in the division’s 2020 table, Pep Guardiola’s side having picked up 66 points from 32 games played.

City began the calendar year with a win at Everton before thrashing Aston Villa 6-1, winning 13 of their final 18 fixtures of the 2019/20 season including their final five in succession by a combined aggregate score of 21-1.

The goals have not quite flowed as easily during the opening months of the current campaign, though City remain in contention amongst a tightly-contested top half, six points from the summit with a game in hand on champions Liverpool.

The summer signing of Ruben Dias has helped transform a previously shaky defence into a position of strength, with no side in the division boasting a better defensive record so far this season.

Finding the balance between attack and defence will be crucial to Guardiola’s side over the second half of the season as they pursue a third title in just four seasons.

Predictably leading the standings are the reigning Premier League champions and current league leaders, Liverpool having been the best side in England over the course of the past 12 months.

Jurgen Klopp’s side have won 76 points from their 34 games played and could extend that total should they avoid defeat during tonight’s trip to face Newcastle at St James’ Park.

Liverpool won their opening eight Premier League fixtures of the calendar year as part of a joint-record 18 consecutive victories, with the Reds having lost on just four occasions in 2020 – two of which came after a first league title in 30 years had already been secured.

Despite a wealth of injuries this season the champions remain the favourites to defend their crown and the team to beat, Liverpool the highest-scoring side in the division and currently leading the title race once more.

After a calendar year to savour Liverpool will be hoping that 2021 brings yet more success to Anfield, Klopp’s side well positioned to deliver more silverware to Merseyside at the season’s end.