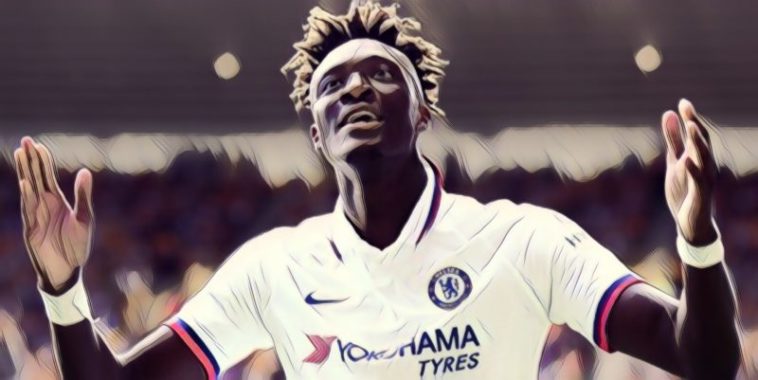 Chelsea forward Tammy Abraham admits he studies videos of the world’s best strikers on YouTube as he bids to continue developing his game at Stamford Bridge.

Abraham has thrived since being handed an opportunity under Frank Lampard this season, scoring 11 goals in all competitions,  and impressing alongside fellow academy graduates Mason Mount and Fikayo Tomori in Chelsea’s new-look side.

After each one of the trio spent last season on loan in the Championship, Abraham reflecting on their collective journey so far ahead of tonight’s huge Champions League clash with Valencia.

The 22-year-old admits to studying some of football’s best forwards as he bids to develop his game further, admitting to “stealing ideas” from the likes of Harry Kane and Robert Lewandowski as he bids to establish himself at the very highest level.

“Before that Valencia game (in September), Mason (Mount), Fikayo (Tomori) and I were warming up together and it didn’t feel real yet, that we were all in the Champions League together,” Abraham told the media in the pre-match press conference.

“Hearing the Champions League music in the background, we all said together that we were in the Championship the season before.

“For many of us it is a dream come true, so we don’t want that dream to stop now. We want to keep going, keep pushing, keep doing the best we can and like I said tomorrow we have to just leave it all out on the field.

“I watch so many players. Harry Kane, (Sergio) Aguero, (Roberto) Firmino, these are Premier League strikers obviously but also (Robert) Lewandowski and all sorts and players who have played in this competition before.”

Chelsea head to Spain this evening for a fixture which will have huge implications on their chances of progressing to the knock-out stages.

Lampard’s side are currently in a three-way tie with this evening’s opponents and Ajax on seven points at the top of a fiercely competitive Group H, and Abraham admits the clash in the Mestalla is the biggest game of his career to date.

“Like I said, tomorrow is the biggest game of the season so far and you have to let that joy, that childhood dream you’ve always thought of just go for a minute and focus on the game.

“It’s time for work now. I would say (this is the biggest game of my career), definitely, I would say so.”