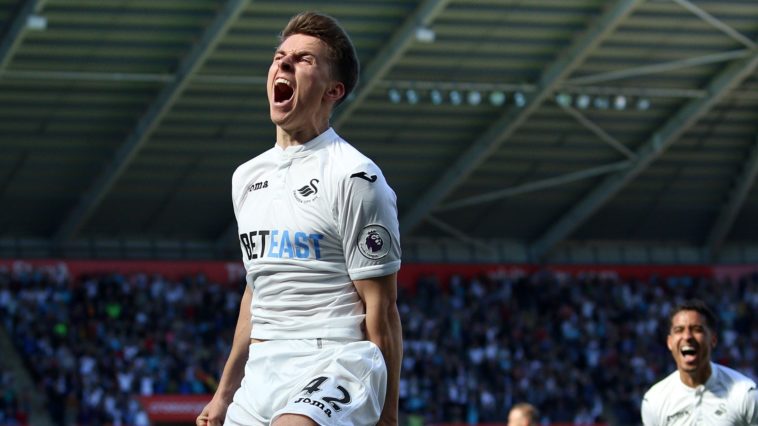 Swansea City bagged a vital three points in their battle against relegation with a 2-0 win against mid tabled Stoke City.

Here are Five things we learned from the Premier League fixture at the Liberty Stadium.

1. Paul Clement still has work to do

Swansea managed to claim a vital three points against Stoke at the Liberty stadium but remain in the bottom 3. With Hull managing to beat Watford despite playing most of the game with 10 men, Swansea still find themselves in the drop zone.

Swansea’s fixtures include a tough trip to Old Trafford, followed by arguably winnable games against Everton, Sunderland and West Brom.

Even though Swansea have been much improved under Clement they still need results from their last four games to jump above Hull and ultimately stay up.

2. Stoke continue to struggle on the road

Stoke haven’t won or even scored on the road since January’s win over Sunderland. As a lot of teams have found comforts at home this season, poor away form hasn’t been too much of a problem.

But if Stoke and Mark Hughes have ambitions of more than a mid-table finish, poor away displays must be addressed.

It could be argued that as Stoke are mid-table and not fighting to avoid relegation or win a title they simply don’t have the motivation and desire of other sides in the league.

3. Gylfi Sigurdsson is far too good for the Championship

With his pin point corner providing the assist to Fernando Llorente’s header, Sigurdsson has now taken his assist tally up to 12 for the season.

He finds himself in good company, level with Christian Eriksen, one behind Kevin De-Bruyne and three more assists than Alexis Sanchez.

If Swansea manage to stay up there may be question marks around his future. The quality he possesses has attracted the attention of big clubs before but his spell with Spurs was a sporadic and frustrating one for the Icelandic playmaker.

This may make him think twice about leaving Swansea again, but one thing is for certain, he is far too good for the Championship.

Since his January move Saido Berahino still hasn’t managed a goal. Last week against Hull he did put the ball in the back of the net but was adjudged to be offside. It could be argued he hasn’t been given the necessary service to be judged on, but this wasn’t the case today.

He managed to squander two excellent headed chances and failed to impact the game from then on.

If he is to become the player who scored 14 goals in a season he needs his confidence back. To do this he almost certainly needs a goal and to push on from there. Maybe a pre-season could also do him the world of good.

Mark Hughes once again changed Stoke’s formation from last weeks starting 3-4-3 to a 4-4-2 at Swansea. Stoke looked scrappy in possession and clearly missed something in midfield.

A notable absence was talented Spaniard Marc Muniesa, who performed well in both defence and midfield last week against Hull.

This isn’t the first time Muniesa has played well and then been dropped, the same happened when after a strong performance away in the loss to Burnley, he was then dropped against Liverpool.

Hughes doesn’t seem to have settled with any line-up or formation, perhaps leading to the inconsistency Stoke has suffered from this season.