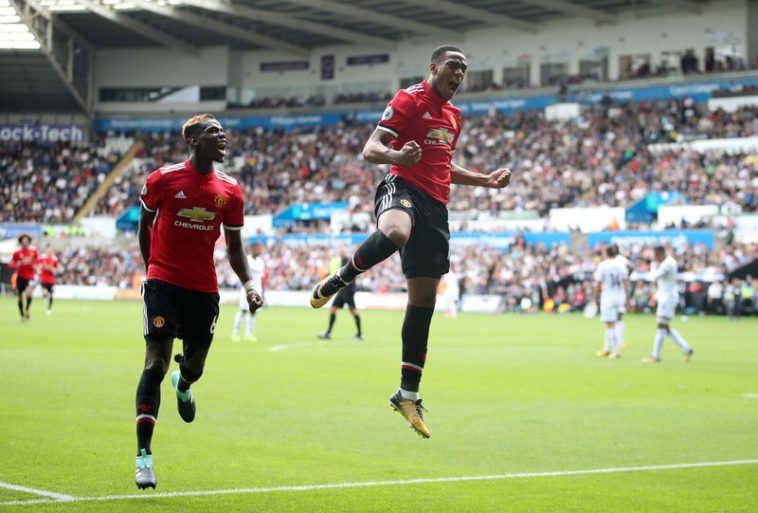 Manchester United emphasised their title credentials with a clinical and ruthless 4-0 win over Swansea at the Liberty Stadium, the second 4-0 win for Mourinho’s men in the space of six days.

The Red Devils were unchanged from the win over West Ham, emphasising Jose Mourinho’s feeling that his team is ‘confident’ and ‘happy’ within their structure and play style.

Swansea had the first chance of the game, Jordan Ayew’s cross drifted towards goal, striking the bar, leaving David De Gea frozen to the spot. United’s first clear chance came when Phil Jones headed the ball onto the cross bar from a Juan Mata delivery into the box.

The Manchester club found the breakthrough when Eric Bailly flicked the ball into the net, pouncing on the rebound after Fabianski parried a header from Paul Pogba.

Mourinho’s men were comfortable in the second half, too comfortable from a Swansea point of view. As the second half of the game went on Swansea opened up looking to get back into the game, the Swans were very susceptible to the counter attack from United. That proved to be the case as United soared to the finish in the final period of the game.

United’s number nine had been quiet throughout the game, until a composed and clinical pass from Henrik Mkhitaryan found Lukaku who placed the ball into the net to make it 2-0 to the league leaders.

Just over a minute later a ruthless counter attack from the reds saw Mkhitaryan surge into the Swansea final third on the counter to expertly pick out Paul Pogba with a brilliant pass, leaving the Frenchman free to chip the ball past Fabianksi to score his second goal in two games.

Just 60 seconds later United were on the counter again. Paul Pogba strode into the Swansea half to pick out Anthony Martial. The substitute Martial on the edge of the box, cut in onto his right foot to place the ball into the bottom corner to make it 4-0 to the visitors and round off a sensational four minute spell for Manchester United.

Swansea had no answers for the pace, the power and the strength of Mourinho’s men who look a totally different prospect to last season. The ruthless clinical nature of the Red Devils on the transitions is what they lacked last season. Added to the strength of United’s defence the new found flair and clinical nature upfront has made them too much for West Ham and now Swansea to handle.