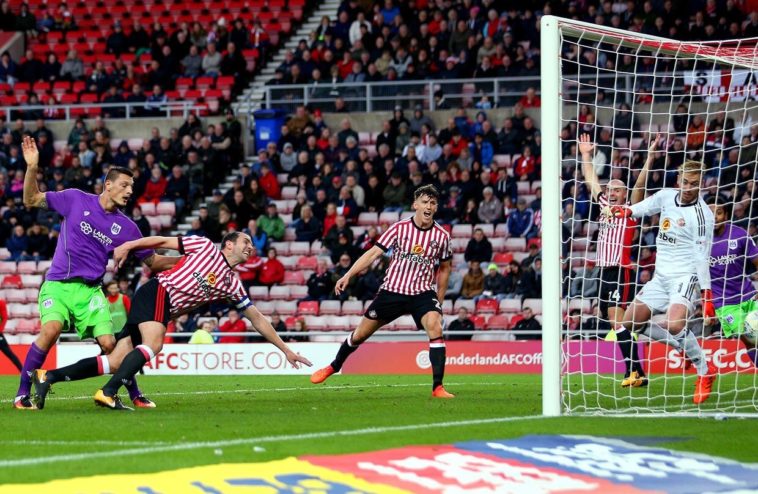 Sunderland miserable home form continued as they hosted Lee Johnson’s Bristol City on Saturday, with the Wearsiders continuing their winless run at the Stadium of Light since December last year.

Grayson dropped Lee Cattermole for Irishman Darron Gibson. Jason Steele kept his place despite being heavily criticised. The Robins, coming off the back of a 4-1 win against struggling Premier League side Crystal Palace in the EFL Cup, were in high spirits for their trip North.

The first chance of the game fell to the Sunderland skipper John O’Shea off a corner ball. A heavy touch by the centre half took him into the six yard area only for his sliding shot to rattle the crossbar.

Billy Jones then presented Lewis Grabban with a difficult chance when he received a long ball; he ran on and attempted to lob the keeper only for it to sail over.

Callum O’Dowda played a deep corner into the back post where striker Bobby Reid was on hand to head past Steele at his near post. Reid had drifted from Gibson and goalkeeper Steele should’ve came and collected, Oviedo was also beaten on the post but you’d expect the goalkeeper to make the save.

Sunderland came close when Darron Gibson hit a driving shot from 25 yards out. Although the initial shot looked destined for the corner flag it deflected off the centre half and forced Fielding into a good save.

Sunderland eventually pulled level when Grabban finished off a goalmouth scramble. McGeady made the move into the area before City half cleared to Jones on the penalty spot, a few deflections later it fell to on loan striker Grabban who netted past Frank Fielding.

Second half saw the first chance arise for Irishman Callum O’Dowda of the visitors, he made the run from the half way line after Jones was caught in possession and possibly fouled later on. However, the Irishman put it straight at Steele at his near post and the Newton Aycliffe born stopper turned it over.

Lee Johnson’s side then took the lead for the second time when substitute Milan Djuric nodded home O’Dowda’s cross. The danger man was on the right wing all by himself as Jones had drifted into the middle, Kone made a half-hearted attempt to prevent the cross but he played it into Djuric’s head. Although, the big striker looked to have pushed O’Shea in the back when rising for the ball. However, Steele made no attempt of a dive or didn’t even bother outstretching his arms.

Another poor performance from Sunderland and surely the time is ticking for Simon Grayson. The Mackems have only seen one league win in Grayson’s tenure at the Stadium of Light, with the Wearsiders sitting second bottom and in serious trouble. Sunderland would’ve been above Bolton on only goal difference if Fulham hadn’t have equalised in the last minute at Craven Cottage.

As for Lee Johnson’s highflying Robins, they sit 4th place in the playoffs.

Time Running out for Simon

Grayson denied any sense of crisis in his interview and seemed to think it was a good performance, as well as “taking positives”. However, taking positives isn’t enough! Sunderland need points and fast. Blackburn Rovers were relegated to League 1 last season on 51 points, where Grayson’s men have only accumulated nine so far. The next fixture is Bolton Wanderers at home, who have recently picked up form.