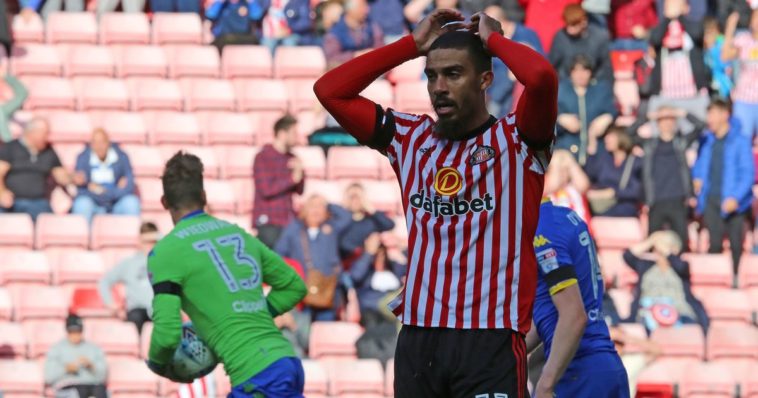 Sunderland’s unbeaten start to the Championship is over after a 2-0 defeat at home to Leeds United.

Leeds were the second visitors to the Stadium of Light this season and Simon Grayson would again go unchanged to the team that just about held on in Sheffield midweek. Not only that, Grayson would be facing one of his former employers, the West Yorkshire club were promoted to the Championship under the current Sunderland gaffer’s tenure at Elland Road. Leeds were adapting to life under new Spanish manager Thomas Christiansen following Garry Monk’s resignation. Both teams were unbeaten going into this fixture.

Sunderland started on the front foot and looked the most likely to score in the opening period. The first chance coming from a Galloway cross which was just in front of the arriving Lewis Grabban.

Sunderland came close again when former Newcastle full back Vuron Anita botched a clearance it fell straight to Vaughan but it was blocked by the centre half. Lewis Grabban would then hit the bar after a slight deflection off the defender on the line, Grabban cleared to Vaughan who held the ball up brilliantly for Grabban who showed great pace to support his strike partner, he was played in; when most fans though he’d have shot first time he instead took a touch taking the defender out of the game, beating the goalkeeper but a slight nick off Liam Cooper on the line helped it onto the crossbar.

Sunderland would come to regret their miss as Leeds would score against the run of play through Spaniard Samuel Saiz. Ezgjan Alioski somehow managed to shake off Koné who was out of position, but the Ivorian was only there because Galloway left the defence massively exposed. He allowed the Macedonian into the area to play it to the summer recruit Saiz, who smashed it hard and low past Steele who again looked poor and shaky throughout.

Lee Cattermole’s strike wasn’t much to shout about as it looked a routine stop for goalkeeper Felix Wiedwald but it was the closest Sunderland would come until the end of the first half. Galloway gave away far too many chances first half and made life a lot easier for Leeds winger Alioski who should’ve doubled the Yorkshire team’s advantage but chose to shoot early, dragging it wide.

The second half saw Sunderland again on the back foot and Steele being forced into turning away Alioski’s free kick, although some may have said he should’ve held onto it.

Again Alioski caused problems down Sunderland’s left and then played in Saiz who played a delightful cross to the Northern Irishman Stuart Dallas who nodded home although you really would expect Steele to make the save as it was right in the middle of his goal. Jones had lost his man to cover in the centre for Browning who was covering Koné who was covering the out of position left back Adam Matthews who replaced Galloway second half, although not much improved defensively down the left for Sunderland even with the Welshman on instead of the Everton loanee.

Sunderland’s unbeaten run came to an end and it is still apparent that Sunderland have nowhere near the squad depth they need to challenge in this division. If Sunderland don’t get a left back by the end of the window the Black Cats could be in serious trouble as Costa Rica international Oviedo doesn’t want to be at  the club and Brendan Galloway just hasn’t got the quality and likely will never have the quality of a good footballer.

Steele speaks for himself really, costing minimal from a team relegated from the Championship last season and conceding 62 league goals last season, not only that getting demoted to Boro’s 3rd choice goalie under Aitor Karanka.