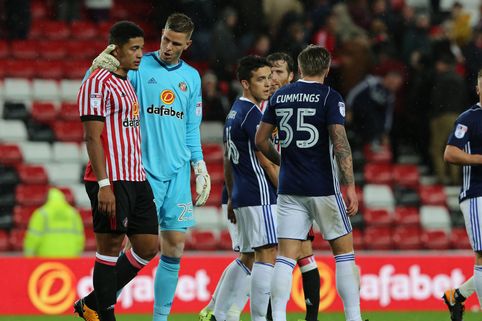 It was another defeat for Sunderland as the pressure on Simon Grayson continues to mount.

Sunderland went into the game without a home win in 9 months, the last one coming in December against Watford. Forest have had a better start by far than Sunderland, then again most people have. Warburton’s men have looked improved from the relegation threatened team last season, especially with the flair if ex Rangers winger Barrie McKay and experienced Championship journeyman Daryl Murphy who has represented both North East clubs.

Grayson made changes again from the side that were battered by Sheffield United on Saturday, including Oviedo in for Galloway, Matthews in for Koné, who supposedly has an injury, Cattermole in for Rodwell and McManaman in for Vaughan.

In yet another poor and uneventful show Sunderland started as the better team but as usual it lasted no longer than 20 minutes when a few half chances came and went with nothing to report on, the game soon went flat and Sunderland resulted to the long ball as ever, even though Forest had set up for a draw.

The first half chance fell to Lewis Grabban
outside the area, the on loan Bournemouth striker hit it from range only for it to sail just wide. Jonny Williams was one bright spark as he burst forward and rolled it to the edge for the arriving McManaman who’s shot was blocked by the visitors’ centre had.

Just before the half time whistle Sunderland’s already limited attacking options got even fewer as Lewis Grabban was substituted off injured and replaced by misfiring frontman James Vaughan.

The second half saw a few more chances created, but not many. Callum McManaman ran through from 8 yards after a clever one two but he could only get minimal contact on and consequently rolled it straight at the keeper Smith. Left back Bryan Oviedo then went on a run and was allowed a free shot from range but the Costa Rican only managed to rattle the side netting. Didier Ndong then created space for Honeyman to shoot but the Prudhoe born attacker had his shot charged down to the edge of the area for a first time shot for Welshman Williams to unleash an absolute thunderbolt, only to narrowly sail high and wide. For a moment Sunderland fans had memories of Williams’ international colleague David Vaughan score a similar shot in that goal against Blackburn back in 2011.

Ty Browning denied McKay from opening the scoring with a last ditch challenge which denied the Scottish substitute. Unfortunately for the loanee centre half minutes later he attempted to play a routine pass to his full back Matthews, who was surprisingly good, instead of going to the Welsh right back it was eight yards too short and on a plate for winger McKay who continued his good start as he played it to former Sunderland fans favourite Murphy who slotted it past the goalie Ruiter five minutes from time.

McKay came close for the visitors again as his long range strike was agonisingly wide for him. Sunderland nearly bagged a late equaliser with a flurry of chances in injury time in which goalkeeper Ruiter came up for the 2 set pieces; unfortunately not being able to replicate the goalscoring capabilities of Mart Poom. Vaughan and Wilson having chances at the end but both coming close butnot close enough.

Ultimately it was an improvement from the defeat at home to the Blades but still not in any shape to challenge for anything big. Honestly I cannot see Sunderland ripping up any trees any time soon, especially not with only 1 fit striker who has limited ability.