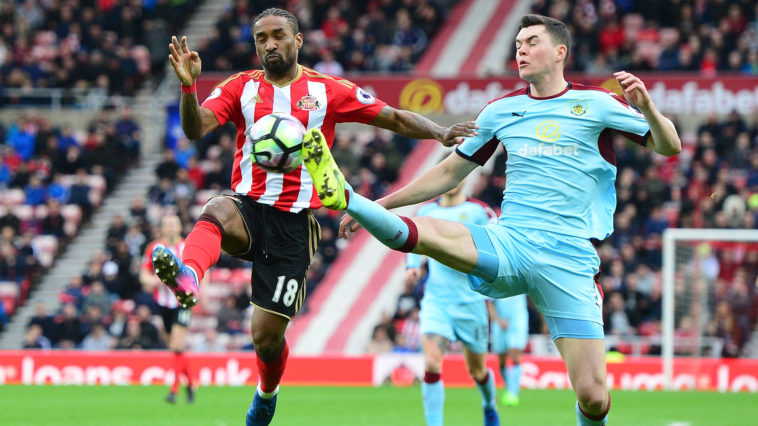 Sunderland and Burnley played out a drab 0-0 draw at the Stadium of Light, but both sides had chances to claim all three points.

Here’s five things we learned from the Black Cats draw with the Clarets.

Heaton kept the Clarets in the game at times on Saturday afternoon. He made some key saves to deny Adnan Januzaj and Fabio Borini and keep Burnley in the game. We saw the struggles the Clarets had at Swansea two weeks ago when Paul Robinson was in net, and Burnley crumbled. Without Heaton, I dread to think where the Clarets would be.

Sunderland again drew a blank in front of goal yesterday, with Jermain Defoe not registering a single shot. When Defoe isn’t firing, you struggle to see where Sunderland’s goals will come from. Chances came their way yesterday with Billy Jones, Januzaj and Borini, but none of them could convert. If the Black Cats are to stay up this season, they need Defoe to rediscover over his shooting boots quickly.

3: Ben Mee and Michael Keane are one of the League’s best defensive partnerships

Most people will read the main point and think I am over exaggerating, but I’m not. The relationship Mee and Keane have at centre half is special, and something hardly any other teams have. They provide a solid base for the midfield to build on and are rarely caught out. When you see players like Phil Jones in the England squad and Ben Mee misses out, it does make you wonder ‘is anyone actually watching Mee play’.

Sunderland at the back are an accident waiting to happen. John O’Shea partnered Jason Denayer yesterday and neither covered themselves in glory. The Belgian made a catastrophic error at the end of the game which nearly cost Sunderland a point. I know Sunderland are missing Kone, who is far better than anything they have, but new singing must be in order in the summer.

5: Robbie Brady must start for Burnley

Club record signing, Robbie Brady was again left on the bench yesterday. This move bemuses most Clarets fans, especially when George Boyd and Scott Arfield are the starters. Brady offers far more of an attacking threat. You could see when he came on yesterday that he is more of a threat going forward. Boyd would be the one to make way for me after a string of below par performances.

Please support Football Faithful by sharing this article on Social Media using the icons below. Please also check out the Full Match Report and Player Ratings from this game