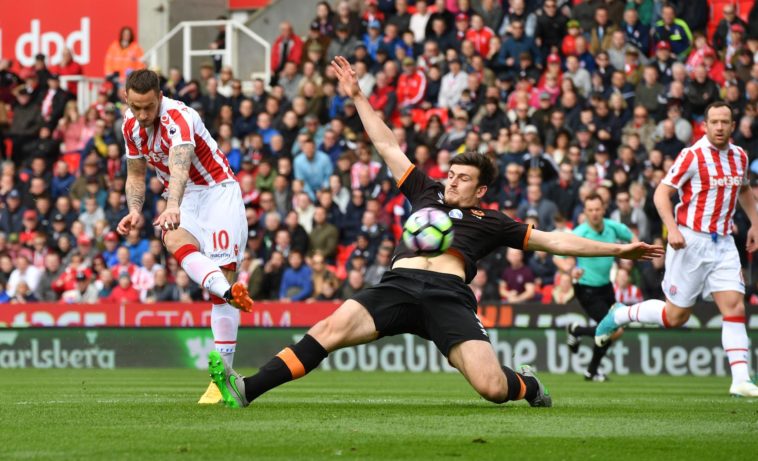 In a somewhat scrappy affair at the Bet 365 stadium, Stoke City turned out 3-1 victors.

The game began with a lot of attacking intent from Stoke and the deadlock was soon broken by Marko Arnautovic in the 6th minute. After some good build up play, Xherdan Shaqiri threaded a ball through for Arnautovic on the left, who cut inside two Hull defenders and smashed the ball home into the top right corner.

Stoke continued their dominance and made a number of great chances, Shaqiri finding Arnautovic again, this time with a chipped through ball, but the Austrian blazed his volley over the bar.

Next up was Berahino who did in fact finish his chance, only for the linesman to adjudge him offside. Hull did come close with a great chance through Niasse just before half time, but he failed to convert.

Niasse was lucky not to see red at the end of the first half after an altercation involving Lee Grant. Hull’s striker initially went for the ball and ended up clattering the Stoke keeper. After the challenge Niasse was confronted by Stoke’s Geoff Cameron who he decided to slap right in front of the referee not once, but twice. The half time score was 1-0 to Stoke.

The second half started the opposite to the first, with a lot of attacking intent from Hull. Just as Stoke seemed to have soaked up the pressure, a silly mistake from Erik Pieters gifted Hull a corner. Hull took full advantage and following a melee from a corner, Harry Maguire’s deflected effort found its way past Lee Grant.

Changes to change the game

Mark Hughes didn’t wait long to change the flow of the game, making a double substitution in the 58th minute. The pair to come on was Jonathan Walters and Peter Crouch, in place of the again poor Charlie Adam and the unlucky Saido Berahino. This lead to a change in shape from 343 to 442 for Stoke.

Despite Stoke fans booing the decision to bring off Berahino, Crouch quickly proved why he had been brought on. A fantastic long Marko Arnautovic pass found Walters breaking away on the left. Walters took the ball down well, cut onto his right foot and swung in a perfect cross for Crouch. Peter Crouch did what Peter Crouch does and scored an excellent header.

The revitalised system and new front two for Stoke continued to cause the Hull back four serious problems.

Marko Arnautovic continued to run riot and after cutting the ball back for Jon Walters, the Irishman looked set to finesse the ball into the top right corner. His attempt took a small deflection which hit the underside of the bar and only just stayed out.

Stoke put the game beyond any doubt in the 80th minute. Marko Arnautovic returned the favour and passed the ball to Xherdan Shaqiri. Shaqiri took a couple of touches, looked up and then smashed the ball into the top left corner from 25 yards out. The shot flew through the air so quickly it was hard to see, never mind save as Hull’s Jakupovic found out.

Overall this wasn’t the prettiest performance from Stoke but they ground out the result and took their chances. A special mention must go to Marc Muniesa who was harshly dropped against Liverpool after a good performance against Burnley. Muniesa brought the ball out well from the back in the first half as part of a back 3 but was moved into midfield when Adam was taken off.

Hull kept the ball well at times and did threaten, but struggled to cope with the creativity of players like Shaqiri and Arnautovic.

Harry Maguire put in another impressive performance and Tom Huddlestone didn’t really put a foot wrong. If they want to stay up Hull might have to do better on the road.