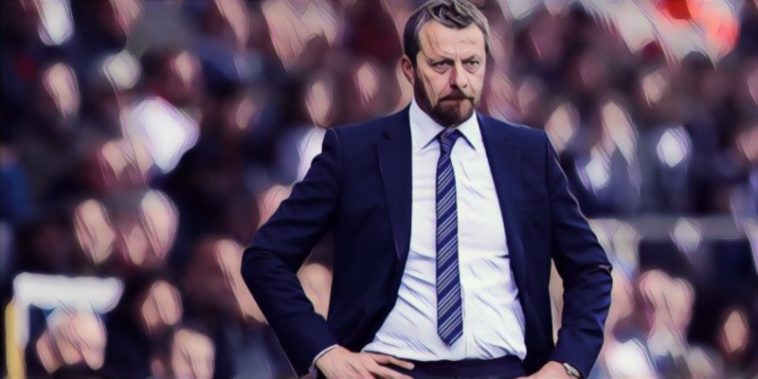 Welcome to Stick or Twist, a new weekly column on The Football Faithful which takes a look at the under-fire manager of the moment and ponders whether they deserve the sack or not.

We will look at factors such as recent form, fan opinion and media commentary, while asking important questions such as ‘Is there a viable replacement available?’ and ‘Is the team just experiencing a dip or are they in a irreversible tailspin?’ This week we take at look at…

There are a number of managers in the firing line at the moment: Neil Warnock, Mark Hughes, Rafael Benitez and Jose Mourinho (and all more likely to get the sack, according to the bookies). But Fulham are at an important juncture; not only have they invested heavily in the squad following promotion to the Premier League, but they have fully bought in to Slavisa Jokanovic and his philosophy.

So much so that, almost one year ago, the club sacked their data specialist Craig Kline and gave the Serbian manager greater responsibility for transfers in one fell swoop. The move paid off; the Cottagers’ poor form was completely reversed following a number of clever January signings, including Aleksander Mitrovic and Matt Targett on loan deals, as they went incredibly close to gaining automatic promotion, before winning the Championship playoff final.

Following a 4-2 loss at Cardiff, there is no denying that Fulham are now fully in the shit. The only question is, do they reaffirm their faith and belief in the manager to turn things around by giving him money to spend in January? Or do they cut their losses and seek out an experienced hand to tighten up their leaky defence? Let’s investigate.

It’s one thing losing heavily to Man City and Arsenal. When your goal for the season is to finish no lower than 17th, the team should not be judged too critically by how it fares against the cream of the crop. Unfortunately for Fulham, they’ve been awful against pretty much every team they’ve faced thus far, regardless of their position in the table.

Conceding four goals to Cardiff City, one of the worst teams in the Premier League, was confirmation that the defence is the worst in the league. Not only have they not kept a clean sheet, they’ve conceded two goals in every game bar one. No team in Europe has allowed more goals in than Fulham, conceding 25 goals in just nine league matches.

Fulham are on course to concede 106 league goals this season.

That would break the record for a 38-game Premier League season by 17 goals.

The defence is crippling them, most notably against Brighton away in September, when they let a 2-0 lead slip in what would have been a terrific victory. Their only win of the season, a 4-2 triumph over Burnley, feels like a long time ago.

Conversely, their attack has been relatively good, scoring in every game bar the opening day. Their current total of 11 goals is better than every side from twelfth position down in the table. Man City aside, they’ve caused problems for everyone they’ve faced. Unfortunately for them, bad defenses almost never survive the drop.

There is by no means a universal stand on whether Jokanovic should remain as manager or not. There is a broad spectrum of opinion, varying from #SlavOut to “don’t you dare touch our Lord and Saviour.”

I’m not saying to sack Slavisa but very concerning that half our fans still think he’s some kind of messiah and can’t do a single thing wrong.

Results have upset the restless and weary among the Fulham faithful, while others are still enamoured by the surly-faced coach and his commitment to attractive, possession-based football.

In order to get a fairer idea of the middle ground, The Football Faithful spoke to Ben Jarman, lifelong supporter and a member of the Fulhamish podcast, who believes sacking the manager could be the wrong move in the long run:

Personally, I think that if Fulham fired Slavisa at this moment in time they would be doing themselves an injustice. Whilst we are looking unstable at the back, there are facets to our play that have advanced. Fulham have been impressive for periods in games, but a mixture of naivety and lapses in concentration have been our downfall. Over the past two years we’ve had an identity, I still believe we are searching for that right now.

In context, Fulham have always started slow before picking up pace around late October to early November. Should we keep faith with Slavisa, there is hope we can turn it around.

My instinct is to stick with him to be honest. We’re usually stronger second half of the season.

“Gutless, spineless, pathetic” — that was the reaction of Football.London reporter Ryan O’Donovan, who works the Fulham beat, to the team’s defeat to Cardiff.

O’Donovan has previously stated his conviction that Jokanovic is the right man for the job, but on this occasion wrote that the manager has to bear responsibility for the errors on show at the weekend.

We’re nine gameweeks into the Premier League season now and I have seen nothing to convince me that the defensive issues are getting better. If anything, they seem to be getting worse.

… changing to play four centre backs against a side that had only scored four goals in eight games was a bizarre decision and one that doesn’t fit with his style of playing football.

The decision to substitute Jean-Michael Seri off and bring on Floyd Ayite and change formation was questionable for me too. That further isolated Aleksandar Mitrovic and meant that Fulham lost a creative player in midfield, meaning Cardiff could press and hassle at will without worry of being carved open by Seri’s passes.

The Observer meanwhile wrote in their match report that “shellshocked” Fulham were “an accident waiting to happen at the back”.

What Is The Manager Saying?

In the post-match press conference, Slavisa Jokanovic backed himself to turn things around at the Cottage:

I am brave and at the end my work is working and fighting to find solution. Like last season, if you want to bet against us, it can be a bit early for you and it is similar to last season where we were in the bottom of the Championship.

We must find a way to improve ourselves and to play like a team, fighting altogether to be more solid and competitive and play better football.We showed some positives, but these negatives kill us and we aren’t solid or strong enough in our box and we are conceding so easy in this way.

It’s complicated to win the game and we must stop this kind of situation.

The Serb emphasised the point that while results in the short-term were concerning, the “process” will eventually take shape:

I make one lap or one lap and a half, sometimes somebody ask when we will settle with a best XI or something like this, I must keep going and working and looking for my best XI

Can He Turn It Around?

In late 2017, Fulham lost away to Sunderland, the Black Cats first home win of the calendar year. At that point they seemed more likely to finish at the wrong end of the table rather than win promotion, but their turnaround was magnificent to say the least.

Can Jokanovic do it again? Perhaps we should be asking how could he not, as upturns in form later on in the campaign have become the norm. It was considered a minor miracle when he brought Fulham to the playoffs in 2016/17, after ensuring the club picked up enough points to survive the drop the season beforehand.

The obvious point to make here is this is the Premier League, not the Championship. There are less games to get into your rhythm, and the opposition are obviously of a higher quality.

Not good enough yesterday and we know that we must improve but through tough times we must stick together more than ever ⚽ Big thank you to the fans for the support as always 👏🏿 #FFC pic.twitter.com/92LieL5Qd5

Fulham spent a £100m in the summer, but their main defensive acquisition was Alfie Mawson from Swansea City, relegated from the top tier last season, while Arsenal loanee Calum Chambers has failed to impress in his senior career. Essentially they possess a Championship level back line, for which Slav must bear some of the blame in recruiting the players at his disposal. But his apparent inability, or indifference, to coaching his defense appropriately with an extra week to prepare is most concerning.

Jokanovic has it within him to improve the dire situation Fulham find themselves in – he’s done it before – the question perhaps is does he have the tools to do so.

Slavisa Jokanovic is currently 14/1 to get fired, according to some bookmakers. That doesn’t exactly scream “you’re getting sacked in the morning”, and that might have something to do with the lack of viable replacements.

Leonardo Jardim is the hottest property on the market after Monaco let him go, and his style of football would fit nicely with this squad. He may have his sights set higher than SW6, however.

The likes of Carlos Carvalhal and Quique Sanchez Flores are available, have managed in the Premier League before and could do something interesting with the players, but their pedigree is hardly much greater than the man holding the reins.

After that you find yourself reading the same list of names you always see associated with vacant positions, such as Steve Bruce and Alan Curbishly.

Given how much the Fulham hierarchy have trusted Jokanovic with this project, backing him with the money to make an impact on the top flight, it would seem somewhat daft to oust him now regardless of results. The Serb may not be held in the same esteem as David Wagner at Huddersfield Town, but he’s not far off. Based on current form however the side is only going in one direction and they are banking on their man to turn it around. Sacking him now might have worse consequences down the line.