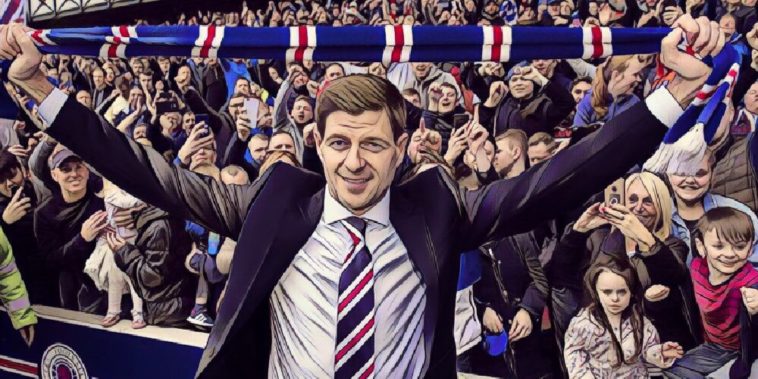 Rangers manager Steven Gerrard has been speaking at length as to why he is enjoying his time at Ibrox so much, as well as the ‘huge void’ that was in his life following the end of his playing career.

Gerrard is of course known for being one of the greatest midfielders the Premier League has ever seen thanks to his stellar career at Liverpool, but is now forging a career as a football manager, and the early indications look as though he is pretty good at that too.

He has steered his Rangers side to the top of the Scottish Premiership, although they have played one more game than Celtic and Aberdeen, who met in last weekends Scottish League Cup final. He has also taken the Gers to the brink of qualifying for the knockout rounds of the Europa League, despite the club not playing European football since 2011 following their financial problems.

Gerrard finally hung up his boots in 2016, and started his coaching career within Liverpool’s academy set-up, before taking the plunge into management this summer when Rangers came calling, and he has revealed that he is loving being back in the cut and thrust of professional football.

“When I came out from being a player, there was a huge void in my life and this is as close as you can get to being in the mix and feeling the emotions that I missed. I am loving the challenge and really ­delighted to be the manager of this club,” Gerrard said in an interview with The Telegraph.

“It is a wonderful club and I just hope that, come the business end, we are still in this position where there is a lot of attention and focus on us and we reward ourselves for all the hard work that we have put in so far and the hard work we will put in between now and the end of the season.

“I don’t see myself being a manager of numerous clubs throughout my career. I think it has to be a ­certain draw, it has to give me a ­certain feeling. I turned down quite a few jobs before I got this ­opportunity. I said on day one that it felt different. That is the reason I am enjoying it so much.”

Rangers moved to the top of the table with a 2-1 win over Hearts at the weekend, and Gerrard said that he loved the intensity of the atmosphere at Tynecastle.

“I don’t think I could influence this game by still playing, but on Sunday, when that roar came just before kick-off, I thought ‘I would love to be playing in this’. What a set-up Tynecastle is, what a stadium – fans on your shoulders, banter ­flying from both sets of fans.