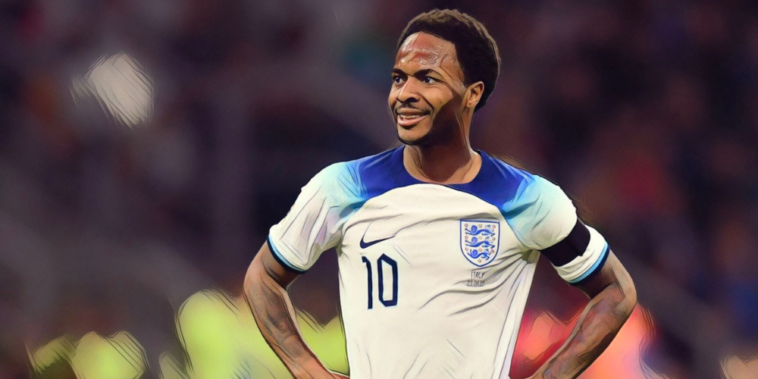 Raheem Sterling insists England’s players must take their share of the responsibility for the nation’s run of results.

England are without a win in five games for the first time since 2014 and were relegated to the second tier of the UEFA Nations League after a 1-0 loss to Italy on Friday evening.

The Three Lions have gone three consecutive games without a goal and have not scored from open play in 495 minutes of football, with their difficult run having increased the pressure on Gareth Southgate.

Southgate’s side take on Germany this evening in their final fixture before the World Cup in Qatar, but Sterling insists there is no ‘need to panic’ following a poor period of preparation.

“We all know that is what comes with football and playing at the highest level. You are under scrutiny and a lot of it is unfair, of course, but that is the level we are at with England,” Sterling said at an England press conference.

“We are always under that pressure to win, and this small loss of form is not something we need to panic about. We now have a big opportunity coming up in the winter to go out and show what we can do again.”

Sterling defended Southgate, who has come under pressure following a downturn in results, and insists the England squad must take their share of the blame for the nation’s disappointing form.

“For what he has done since he has been in the job, he’s taken us to a semi-final and a final, and it just shows the direction we are going in,” Sterling said on Southgate.

“Yes, we know we are not at the level we can be right now, but I still think we have positives to look at.

“After the summer, we all had to come away and look at ourselves. None of us were proud of those performances and I don’t think it is for Gareth to shoulder all of that blame.

“We’ve got players in our squad that have played at the highest level, and we need to take some of that responsibility and start to put some of these performances right, and win football matches.

“That is what we are here for. We are not a country here to just take part, we want to win things. We’ve spoken as a collective and I think we are in the right state to put things right.”