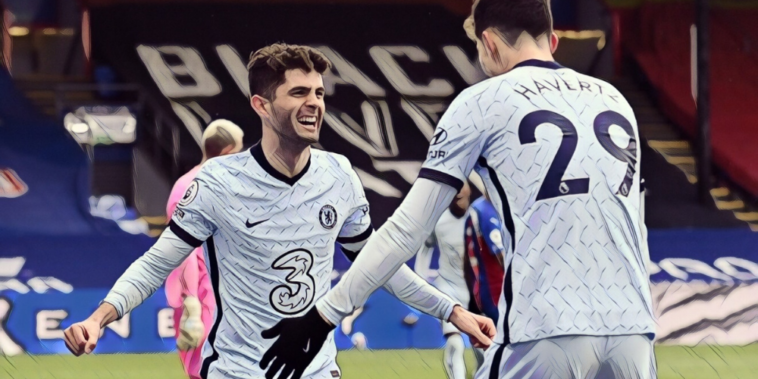 Each week we pick out some of the Premier League’s leading performers and there was no shortage of candidates following the latest round of top-flight action.

Leeds pulled off an almighty upset to win at Manchester City despite being reduced to 10 men, whilst West Ham’s charge towards the Champions League gathered more momentum with a thrilling 3-2 win over fellow hopefuls Leicester.

Chelsea and Liverpool remain in pursuit of the high-flying Hammers with a big-money buy inspiring the former this weekend, whilst Manchester United reemphasised their status as the division’s comeback kings by turning defeat into victory at Tottenham.

So for those of you who follow the Premier League fixtures closely, here are eight top-flight players who shone this weekend.

Jesse Lingard is making himself very much a regular in this feature following his performances since signing for West Ham, the midfielder enjoying the best form of his career since signing on loan from Manchester United.

It’s incredible to think that Lingard did not play a single minute of Premier League football until February 1, such has been his impact as an all-action forward presence in David Moyes’ side in recent weeks.

Lingard was utilised in an advanced role this weekend given the absence of Michail Antonio, proving to be West Ham’s match-winner with a brace to take his tally to eight goals and three assists in just nine league appearances for the Hammers.

The 28-year-old’s double means he has now matched his best ever tally in a Premier League season despite playing just nine times in 2020/21, the midfielder incredibly averaging a goal every 100 minutes.

Jesse Lingard has equalled his personal best of 8️⃣ goals in a #PL season, after only 9️⃣ matches for @WestHam! 👏#WHULEI | @JesseLingard pic.twitter.com/jCKtwPxjBY

His performances have helped inspire West Ham’s push for an unlikely top-four finish with the Hammers in the Champions League places with just seven games of the season remaining.

Having been a forgotten man for club and country, the conversation at present is whether Lingard should now be starting for England at this summer’s European Championship.

On current form, it looks hard to leave him out.

The performance that Chelsea fans have been waiting for ever since the news of Kai Havertz’s record-breaking move to Stamford Bridge was confirmed.

Havertz’s club-record arrival last summer was deemed as a coup for the west London side with Europe’s elite having courted the 21-year-old, though his debut campaign has proven frustrating with injury and illness not aiding his hopes of making an impact.

The Germany international netted his first league goal in October, but has had to wait some six months for his second before netting the opener in Chelsea’s 4-1 win over Crystal Palace this weekend.

Havertz has shown encouraging signs in recent weeks but this was his best performance for the club to date, his goal taken in a classy and composed style before turning provider for Christian Pulisic.

The forward was involved throughout in a false nine role and could have had a hat-trick, including coming close to scoring a sensational individual effort, nonchalantly flicking the ball over Patrick van Aanholt with his left foot before volleying the dropping ball on his right – a save from Vicente Guaita all that prevented one of the goals of the season.

What a half of football from Kai Havertz ⚽️🅰️😍#CRYCHE pic.twitter.com/MXgS5c9MTZ

Havertz dropped deep and linked superbly with the likes of Christian Pulisic and Mason Mount in an exciting attacking performance from Chelsea, a display which showcased the intricacy and intelligence of their £72m summer signing and provided a reminder of his huge ceiling.

Leeds’ win at Manchester City proved the result of the round as Marcelo Bielsa’s side became just the fourth newly-promoted side to win away at the league leaders, an all the more impressive feat given their reduction to 10 men just before the break.

Key to their shock success at the Etihad was the performance of Kalvin Phillips, who patrolled the base of the midfield with authority and gave his side a much-needed vocal presence following the sending off of club captain Liam Cooper.

Phillips regained possession on seven occasions and made three clearances and two interceptions, contributing to a dogged defensive display as Leeds withstood intense pressure from the league leaders.

The 25-year-old dealt with the movement of City’s forward runners impressively and provided his backline with brilliant protection throughout, a performance which highlighted just how comfortably the midfielder has handled the step-up to Premier League level this season.

After a wasteful evening in Arsenal’s 1-1 draw with Slavia Prague on Thursday, this was a much-needed return to form for Alexandre Lacazette who kept the Gunners’ faint hopes of reaching Europe alive.

Mikel Arteta’s side were comfortable in dispatching of a Sheffield United side whose return to the Championship is all but confirmed, with Lacazette netting twice in a 3-0 win at Bramall Lane.

Lacazette – who captained the side in the absence of Pierre-Emerick Aubemayeng – capped a wonderful flowing team move to open the scoring, a sharp interchange of passing play which resembled the football often on offer during the Arsene Wenger era.

The 29-year-old netted his second to seal the win and score his 50th league goal for the north London side, a huge confidence boost ahead of the return with Slavia this week as Arsenal look to reach the Europa League’s last four.

Lacazette’s double also took him to nine away goals in the Premier League this season, a figure bettered by only Mohamed Salah across the division.

Manchester United snatched victory from the jaws of defeat once more after turning around a half-time deficit to win 3-1 at Tottenham, the Red Devils having incredibly won 25 points from losing positions this season – 22 of which have been on the road.

The club’s second half at Spurs was one of their finest 45 minutes of the season and it was Paul Pogba who proved to be the catalyst of the comeback, the France international proving his side’s creative spark in a position drifting inside from the left.

Pogba’s wonderful pass slipped in Edinson Cavani to score a goal that was controversially disallowed, whilst his inventive passing and dribbling ability saw Spurs struggle to shackle his talents.

The 28-year-old remains a divisive figure, but at his best this is what he can provide for Ole Gunnar Solskjaer’s side and the Norwegian will hope to be able to keep the midfielder motivated and singing from the same hymn sheet.

When on song, Pogba can be the difference-maker this side need and a player of his natural talent should be producing performances of this ilk on a more consistent basis.

The list of Premier League players more entertaining to watch than Allan Saint-Maximin is certainly a short one, the fleet-footed Frenchman providing both style and substance to an often mundane Newcastle side.

Saint-Maximin’s injury problems this season have left the Magpies devoid of their most creative spark, their unimaginative and unambitious style given a sprinkling of excitement with the winger’s showmanship.

The 24-year-old came off the bench this weekend to turn the game in Newcastle’s favour at Burnley, Steve Bruce’s side heading towards another concerning defeat until the arrival of Saint-Maximin.

The winger’s speed and skill tormented Burnley and he set up Jacob Murphy for a fine equaliser, getting in behind and occupying a host of Claret shirts before setting the ball back into his teammate’s path.

Saint-Maximin then proved the match-winner after racing from inside his own half to fire home, the Burnley backline terrified to put a challenge in amid fears the speedster would skip round them into space.

Christian Pulisic’s form towards the back end of the 2019/20 season offered huge promise ahead of the current campaign, the Chelsea winger amongst the Premier League’s most exciting players during the final stages of last season.

The 22-year-old has been unable to kick on sufficiently due to persistent injury problems, but has shown signs of hitting form again at just the right time for Thomas Tuchel and his side.

Pulisic followed a goal last weekend with a brace in Chelsea’s 4-1 thumping of Crystal Palace, his first an emphatic left-footed finish after being played in by the impressive Kai Havertz.

The US international added a second from close range to strengthen the west Londoner’s push for a top-four finish, whilst his movement in the final third proved problematic throughout for the overwhelmed Eagles.

Christian Pulisic is coming to life under Tuchel 💪 pic.twitter.com/vJovjrPzHr

An exciting and youthful forward line of Havertz, Pulisic and Mason Mount could yet prove the difference in the Blues’ hopes of securing silverware and Champions League football before the end of the season.

Leeds’ marathon man proved the decisive figure as Marcelo Bielsa’s side stunned the champions elect, Dallas breaking forward to score in stoppage-time and snatch an unlikely victory at the Etihad.

The Northern Ireland international has been a mainstay of the side in a variety of positions this season, though his box-to-box running in midfield have typified the energy Leeds have brought to the Premier League this season.

Dallas scored both goals as the newly-promoted side won 2-1 at the Etihad this weekend, despite seeing Liam Cooper sent off for a rash challenge on Gabriel Jesus in first-half stoppage-time.

Dallas had earlier opened the scoring with a crisp finish after arriving onto the edge of the box, though it is his late intervention that will live long in the memory following a lung-busting run forward in the dying seconds.

Leeds had held on despite heavy pressure from the home side and could have been forgiven for settling for a point, though Dallas had other ideas as he rampaged forward in the final moments, keeping a cool head to finish past Ederson and seal a memorable three points.

Read Also – Searching for Claude: Can the next Makélélé please stand up?