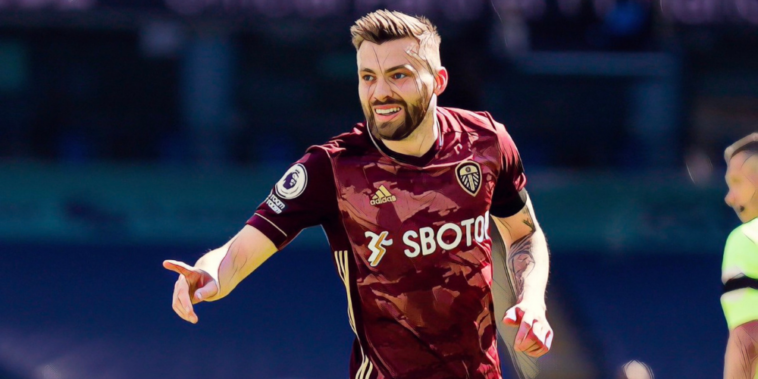 Whilst hopes of a gripping title race and relegation battle appear all but over, the race to secure Champions League football is hotting up with the latest round of Premier League action intensifying a multi-team fight for the top four.

West Ham’s win over Leicester maintained their place in the top four and has narrowed the gap between their beaten opponents and the chasing pack, with just four points now separating Brendan Rodgers’ third-placed side from Liverpool in sixth.

Manchester United strengthened their grip on second by coming from behind (again) to win at Tottenham, whilst Leeds produced the shock of the weekend after beating Manchester City at the Etihad, despite being reduced to 10 men following Liam Cooper’s red card before the break.

So for those of you interested in the best bookmaker comparison sites like whichbookie, here is The Football Faithful’s Premier League Team of the Week.

Leeds became just the fourth newly-promoted side to win away at the Premier League leaders, stunning champions elect Manchester City with a 2-1 win at the Etihad.

Marcelo Bielsa’s side’s win was all the more impressive given they played for an entire half with a man disadvantage, Liam Cooper’s red card leaving Leeds with a mountain to climb despite Stuart Dallas’ opening goal just moments earlier.

Key to scaling their Mancunian Everest was goalkeeper Illan Meslier, who continues to impress during a debut top-flight season in which the youngster has shown huge potential.

Meslier stood strong despite the relentless pressure from the hosts, making six saves in a performance that thwarted City and put a temporary halt on their charge towards the title.

It’s been a rollercoaster week for Trent Alexander-Arnold, responding to his England snub with a brilliant performance at Arsenal last weekend before enduring a nightmare evening in Liverpool’s Champions League defeat to Real Madrid.

The 22-year-old’s difficult evening in the Spanish capital saw his critics once again out in full force, a torrid time against Vinicius Junior showcasing the flaws several have been quick to point out.

It’s important then to praise the positives in the game of a brilliantly talented young footballer, whose match-winning moment this weekend could prove ever so crucial to Liverpool’s hopes of securing Champions League football.

Liverpool were heading towards another frustrating Anfield result until Alexander-Arnold’s emphatic late winner, a moment the right-back will hope moves him out of the most testing period of his career to date.

Llorente won headers and made several vital blocks, including a wonderful interception to deny substitute Ilkay Gundogan from equalising.

Since recovering from an injury-hit start to his Leeds career, the Spaniard has thrived at the heart of the club’s backline, his five blocks of shots on target this weekend the joint-most of any player in a Premier League fixture this season.

Amongst a number of Chelsea players who endured a woeful performance against West Brom last weekend, Kurt Zouma responded impressively as the west Londoners bounced back in style.

Thomas Tuchel’s team returned to winning ways with a 4-1 thrashing of Crystal Palace at Selhurst Park, with Zouma’s strong defensive showing helping lay the foundation for a free-flowing attacking performance.

Most goals scored by a defender in the Premier League this season:

The France international dealt with the physical threat of Christian Benteke and was dominant in the air, including rising highest to head home his fifth Premier League goal of the season – a league-leading tally amongst defenders this season.

Handed an unfamiliar assignment at left-back in the absence of Kieran Tierney, the midfielder rewarded Mikel Arteta’s faith with a strong showing in the Arsenal backline.

Xhaka remains a leader of the side despite the captaincy chaos of last season, his performances this season having gone somewhat under the radar with his attitude and discipline having largely improved.

Perhaps unlikely to feature at left-back against a better standard of opponent, he nonetheless impressed as Arsenal secured a comfortable 3-0 win at Sheffield United.

Fantastic performance from a player who remains integral to this Leeds side, Phillips led by example as Marcelo Bielsa’s 10-man side upset the odds to win at Manchester City.

Phillips has won plenty of admirers this season, including from England manager Gareth Southgate, and showed at the Etihad why he is valued so highly by both club and country.

The midfielder anchored the side expertly as they defended diligently despite being reduced to 10, making seven ball recoveries, three clearances and two interceptions for his side at the Etihad.

WHAT A WIN!! Fought hard to bring those 3 points home today! Unbelievable performance from the team 😍🔥 absolutely buzzing for @dallas_stuart 💛💙 #MOT #ALAW pic.twitter.com/PLnCY8zxmX

Phillips’ leadership was also evident after the dismissal of Leeds’ club captain and his stifling of the Manchester City midfield showcased exactly what he can contribute against opponents of the highest calibre.

Whatever Stuart Dallas tucks into for his breakfast is unconfirmed but appears to be working, the midfielder once again running himself into the ground for the Leeds cause with another display of endless energy.

The Northern Ireland international’s third-man running has been a key component of the club’s attacking play this season and his indefatigable industry paid dividends this weekend, arriving on the edge of the box to lash home the opener at the Etihad.

Dallas worked tirelessly throughout after Leeds were reduced to 10 men, finding the energy somehow to burst forward in stoppage-time and seal a memorable victory on the counter-attack.

What more is there left to say about Jesse Lingard and his stunning impact at West Ham?

A footballer once much-maligned during a frustrating spell on the sidelines at Manchester United has been given a new lease of life at the London Stadium, the high-flying Hammers coaxing the best from a player whose confidence is through the roof.

Lingard missed out on our TOTW last week due to West Ham featuring on Monday night, but his latest star showing made it impossible to leave the 28-year-old out of this week’s XI.

The England international featured in an advanced role high up the pitch given the absence of Michail Antonio and proved West Ham’s match-winner once more, scoring twice as David Moyes’ side boosted their top-four hopes by beating fellow contenders Leicester 3-2.

Lingard’s first was an exquisite volleyed finish before finding himself in the right place at the right time for his second, taking his tally to eight goals and three assists in just nine appearances for West Ham.

8 goals and 3 assists in 9 PL appearances for West Ham!

No one can stop Jesse Lingard 🔥 pic.twitter.com/fOZmnbwPNT

Despite having not played a single minute of Premier League football until February 1, he has now scored more goals than the likes of Sadio Mane, Jack Grealish, Timo Werner and Phil Foden this season.

Brilliant off the bench to secure what could prove a crucial victory in Newcastle’s survival fight, what a difference the Frenchman makes to this side.

Newcastle’s inability to get the winger on the pitch for much of the season has contributed to their struggles, his electricity as transformative to his side’s style as almost any player in the division.

Burnley were terrified of his dynamism after arriving off the bench, with Saint-Maximin occupying three defenders before teeing up Jacob Murphy for the equaliser at Turf Moor.

The 24-year-old then scored a stunning solo effort to seal all three points for Steve Bruce’s side, running from inside his own half before twisting past James Tarkowski and firing home.

Could have had a second assist following another enterprising run to set up a chance for Miguel Almiron, his impact off the bench a demonstration of his huge importance to the Magpies.

Has Kai Havertz finally arrived as a Chelsea player?

It’s been a difficult debut season for the record signing so far, but this was a performance that offered a reminder of just why the 21-year-old was talked about amongst the best young players in world football upon his arrival.

Havertz scored one and provided another in a position as Chelsea’s false nine, though he could easily have had a hat-trick including a wonderful individual effort that saw only Vicente Guaita deny one of the goals of the season.

Great win from the team 💪🏼 pic.twitter.com/MWJmIUQ33i

The Germany international linked well with the equally impressive Christian Pulisic and Mason Mount, an attacking performance from the summer signing that will have Chelsea supporters hugely excited.

An absolute masterclass of centre-forward play from a veteran who has spent more than a decade perfecting his trade, Edinson Cavani led the line in fine fashion as Manchester United came from behind to win at Tottenham.

Spurs could not deal with the intelligence of the Uruguayan’s movement, getting across defenders on several occasions and finding himself plenty of space within the penalty area.

Unfortunate to see a first goal disallowed for a ridiculous decision following VAR consultation, though he was rewarded for his performance with a diving header to put the Red Devils ahead 11 minutes from time.

His future remains uncertain, but the 34-year-old has plenty left to contribute at the highest level.