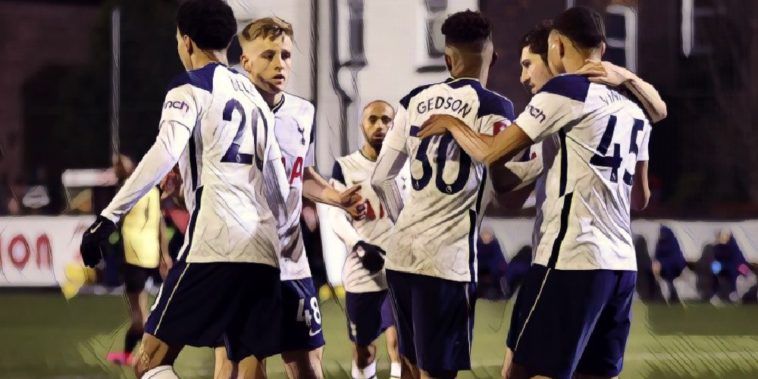 Tottenham Hotspur ran out 5-0 winners against non league side, Marine, to progress to the FA Cup fourth round.

There were 160 places between with the two sides in what was one of the biggest mismatches in FA Cup third round history.

Unsurprisingly, it was Spurs who dominated from the off, although it was the eighth tier side who first came closest to opening the scoring after 20 minutes, Neil Kengni rattling the bar from all of 35 yards with former England ‘keeper Joe Hart well beaten.

Four minutes later though, and the Premier League side took the lead, Dele Alli producing a a quality ball into striker Carlos Vinicius, and while the striker seemed to mishit his strike, his touch sat down ‘keeper Bayleigh Passant before the Brazilian smashed the ball into the back of the net from less than a yard.

The 25-year-old netted his second six minutes later, Dele Alli again instrumental with a tidy ball over the top to Ireland international Matt Doherty whose first-time effort was well saved by Passant only for it to be parried into the path of Vinicius who again tapped home from close range.

Two became three just after the half hour mark with a tidy free kick from Lucas Moura, before Vinicius wrapped up his hat-trick in the 38th minute, lifting it over the keeper with a deft finish.

3 – Carlos Vinicius is the first player to score an FA Cup hat-trick for a side managed by José Mourinho since Frank Lampard for Chelsea in January 2007 (v Macclesfield). Ruthless. pic.twitter.com/juYbD3PjdZ

Jose Mourinho threw on Alfie Devine at half time, the 16-year-old becoming Spurs’ youngest ever player, and 15 minutes later the fresh-faced teen had his first senior goal, cutting in from the left before firing low into the bottom corner.

Mourinho insisted he would ‘respect’ the competition and their lowly opponents by playing a strong side, and speaking afterwards, he said he was happy with their professional performance.

“I am happy,” he told BBC Sport. “I think the boys were professionals and didn’t stop until the game was over in terms of result. The attitude was positive and that means a lot for me and also for the competition and to Marine’s guys, because they felt we played seriously.”

Hat-trick hero Vinicius has struggled for game time since his arrival from Benfica due to the stunning form of Harry Kane and Son Heung-Min, and the Portuguese was ‘happy’ for his back-up striker.

“It is nice for him,” he said. “Of course, for a striker that doesn’t play a lot because in front of him is the big one – every time he has a little chance to play, like in the Europa League, he is there for us and we are very happy.”

Meanwhile, he also was delighted for teenage scorer, Devine.

16 – Aged 16 years and 162 days old, Alfie Devine is the youngest player to score for a Football League or Premier League club in the FA Cup since George Williams for MK Dons v Nantwich in November 2011 (16y 66d). Simply. pic.twitter.com/TXR1VNYEzr

“It is good for the kid. This season we have managed to give minutes to young guys – Dane Scarlett youngest one to play in the Europa League, now for Alfie to come to his area, he is not far from here, to make his debut and score his first goal is good for him and a good feeling for everyone at the academy.”

Next up for Spurs is a trip to face in-form Aston Villa in the Premier League.