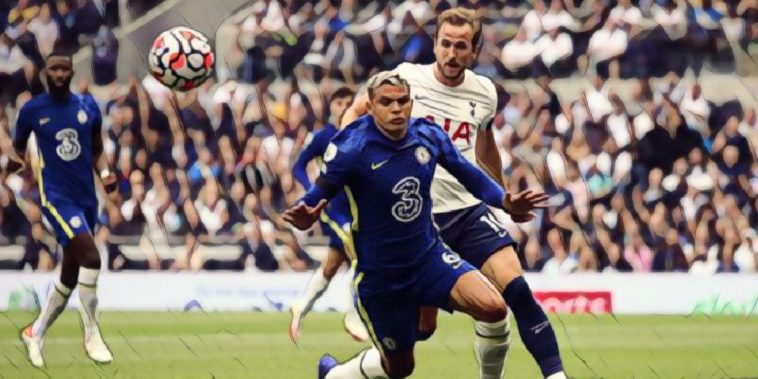 Chelsea moved to the top of the table with an impressive 3-0 victory away at Tottenham Hotspur on Sunday afternoon.

There was an emotional atmosphere pre-match following the sad news of the death of World Cup winner and legendary striker Jimmy Greaves at the age of 81.

The prolific former England international enjoyed a strong affiliation with both sides, albeit with his most iconic spell coming at Spurs, where he remains atop the pile as the club’s all-time record goalscorer with a remarkable tally of 266 goals in all competitions.

RIP to a footballing legend pic.twitter.com/djAesKXIrt

The hosts had slipped to a 3-0 defeat last time out against Crystal Palace and were no doubt perceived as the underdogs against their London rivals, yet started the game in blistering fashion and really took the game to the Champions League holders.

After that initial strong start, however, Spurs were simply overpowered by Thomas Tuchel’s side after the break, the Blues taking the lead through Thiago Silva’s header, before substitute N’Golo Kante’s deflected effort made it 2-0.

With Chelsea in full control, the win was sealed in the final few minutes after Antonio Rudiger slotted home to continue his side’s unbeaten run and condemn the hosts to a second successive defeat.

Here’s how we’ve rated the players…

Arguably Spurs’ best player on the day. Reacted superbly to save from Marcos Alonso just after the break, while he also made another stellar stop to deny Thiago Silva from a corner. Could do little about any of the goals, particularly the second.

Was caught napping for that Alonso chance early in the second-half and was given a real test by the rampaging wing-back from then on.

Has had a turbulent start to life at Spurs due to his controversial international involvement, yet the Argentine looked impressive to begin with on his first start for the club, shackling the in-form Romelu Lukaku with relative success. As the visitors grew into the game after the interval he struggled to deal with their pace on the break, and was replaced by Davinson Sanchez for the final few minutes.

The returning Englishman produced an excellent block to deny Marcos Alonso on the goal line, but was then involved in Chelsea’s second goal with the ball striking his foot and ending up in the back of the net, after N’Golo Kante’s speculative effort.

The Spaniard raced clear early in the first half but produced a disappointing pull-back with teammates in space and his pass was comfortably cut out by Antonio Rudiger. Struggled to get forward as much as he would have liked after the break with Spurs under the cosh.

The usually dominant Dane was simply overpowered after the break by the strength of the opposition midfield and couldn’t dictate tempo as he would have liked.

A rare start for the Frenchman yet he couldn’t really make it count, with his future at the club still looking uncertain. Was withdrawn midway through the second-half with Oliver Skipp taking his place to shore up the midfield.

The midfielder has endured a difficult last few seasons, notably missing out on a number of matchday squads under Jose Mourinho, yet looks to be finding some form of consistency once again under his new manager. Set Sergio Reguilon free with a clever flick in the first-half, but faded as the game progressed.

Like Romero, the former Paris Saint-Germain man only returned to the country in the early hours of Sunday morning, although that didn’t seem to inhibit his display as he looked sharp from the off, as Spurs took the game to their opponents in the opening exchanges. Was replaced on 60 minutes after the Blues had taken control.

Spurs are no doubt a far superior team when the Korean is in the side and he looked lively early on, causing problems for the opposition backline. Like most of his teammates, his impact was hampered after the break.

The wait for a first league goal of the season continues for the England captain, with his involvement dwindling as the game went on. Was starved of service in truth.

Came on as a more defensive-minded option in place of Tanguy Ndombele midway through the second-half, although couldn’t prevent the visitors’ threat on the break.

A tough game to enter as a substitute, the summer signing showed flashes of his undoubted talent but couldn’t fashion any openings.

The standout alteration in Tuchel’s side following an injury to Edouard Mendy, the Spaniard showed early nerves after fumbling a Harry Kane cross, albeit then did well to smother Heung-min Son with the Korean bearing down on goal.

A far from comfortable start to the game for Christensen and co, yet like his fellow defenders he looked more assured after the interval and snuffed out any rare Spurs foray forward.

A calming presence at the heart of the backline, the veteran Brazilian was integral in helping thwart the hosts in that early spell of Spurs pressure. Added to his fine defensive display by putting the visitors ahead just after the break with a fine header from a corner.

The former Roma man never seems to let his manager down and was once again imperious at the back, helping to ward off Spurs’ early dominance and getting himself on the scoresheet with a well-taken late strike. Blues fans will be hoping he signs a new contract sooner rather than later, with his existing deal expiring in the summer.

Chelsea’s ‘Mr Consistent’ never disappoints no matter where he lines up, having taken on a more advanced role at right-wing back in the absence of the suspended Reece James.

A quiet afternoon for the Italian with the visitors struggling to match Spurs’ early pace, although his knack of keeping possession proved pivotal in the latter stages as the away side ultimately eased to victory.

The Croatian was hugely impressive last weekend in the 3-0 win over Aston Villa and while he didn’t get on the scoresheet this time around, it was another strong midfield showing, particularly after the interval. Won the ball high up the field in the build up to Kante’s goal, and should have scored in the final few minutes yet hesitated in front of goal.

After a difficult start for both Alonso and Chelsea, the Spaniard gradually grew into the game as it went on, notably providing the assist for Thiago Silva’s header, while twice going close to getting himself on the scoresheet either side of that opener.

Not the best day’s work for the Englishman as he was withdrawn at half-time in favour of N’Golo Kante. While potentially just a tactical change, the playmaker had, however, been ineffective in the first-half.

With Chelsea soaking up a lot of pressure in the early stages, the German forward was a real asset on the break and seems to be forming an impressive partnership with Romelu Lukaku. Was substituted for the final 20 minutes with Timo Werner taking his place.

Not his greatest performance by any stretch, yet his presence alone is enough to cause any backline problems and often frees up space for his teammates. Perhaps should have had an assist after playing in Timo Werner, who fired a tame effort at goal.

Brought on at half-time in place of Mount to counter Spurs’ impressive early start, the diminutive Frenchman then found himself on the scoresheet after a strike from distance which took a wicked deflection off Eric Dier.

A second-half substitute for compatriot Havertz, the former RB Leipzig man illustrated his electric pace as ever, but also his infuriating wastefulness in front of goal, notably squandering an opportunity after being teed up by Lukaku. Redeemed himself by setting up Antonio Rudiger for the third goal.