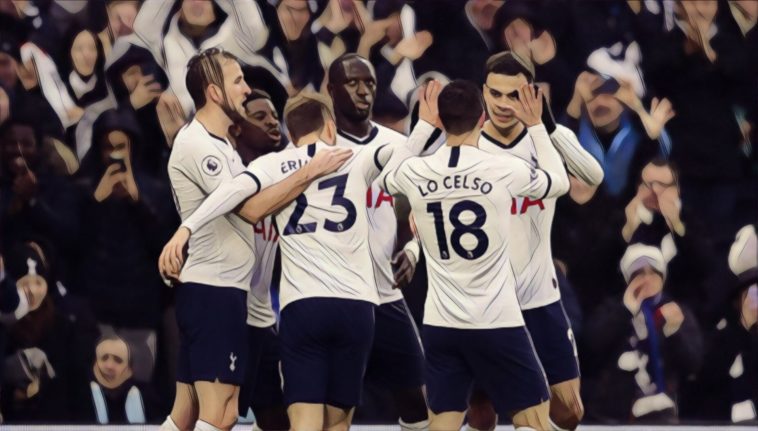 Tottenham Hotspur bounced back from last week’s defeat against Chelsea to complete a comeback win over Brighton at home.

Spurs thought they had opened the scoring after Harry Winks hit a ball over the top for Harry Kane to finish tidily, but the VAR called it back for offside. Instead it was the Seagulls who took the lead in the first-half through defender Adam Webster, who headed home from a free-kick for his third goal of the campaign.

The hosts hit back through a stinging Kane effort eight minutes after the interval, the Englishman volleying a rebound past goalkeeper Matt Ryan. That was followed up with a stunning finish by Dele Alli in the 72nd minute to seal all three points for the Lilywhites.

Following the final whistle, Jose Mourinho repeatedly mentioned the team’s “fighting spirit” in his comments to the media, while emphasising how important it was to recover from the Chelsea defeat.

“The spirit in the second half was so important. We did not start very well, we scored a beautiful goal which was offside and then they went on and scored,” Mourinho told his post-match press conference.

”Brighton were very difficult to control. Our spirit was fantastic. We made some adjustments in the second half, we equalled their numbers in midfielder and that gave us more possession. It was hard until the end but very important.

“We cannot lose two in a row, the work rate was really brave. I told the boys to focus on this game and to give every last piece of energy we have. I think when you lost a game it hurts. If you are not hurt then you are not committed. You need to be emotionally strong. You need to recover quickly and that did not happen today. It was hard. Fantastic spirit by the players.”

The Portuguese tactician was effusive in his praise for Alli, who now has eight goal involvements in eight games under the new Spurs manager.

“Another goal and another incredible performance and effort. The work rate was absolutely incredible from Dele. The little details are more important than what people look at. His attitude and fighting spirit was so good.”

The England midfielder himself admitted that the side got off to a “slow start”, but they always had confidence in their star striker to get them back in the game:

“When you have a striker like Harry, you know all you have to do is give him the chances and he will put them away. He works so so hard, probably harder than he needs to.”

Kane, speaking to Amazon afterwards, credited his remarkable Boxing Day record of eight goals in five appearances on 26 December to his Christmas dinner.

“I enjoy it. The games come thick and fast. I don’t know what it is, maybe the Christmas dinner gives me a bit of a boost. Might have to have it more often.”

Also speaking to Amazon, Brighton manager Graham Potter lamented not getting anything from the match, but said he was “really pleased” with his side’s contribution:

“The players gave everything, there are lots of positives for us,” he told Amazon. “I feel for them in terms of coming away from it without anything but that is the Premier League. Small margins. We will recover quickly and go again.

“It is the little things we have to carry on working with. The details in the game. No matter what you do it is not that easy to get the points in the Premier League.

Read: Our Premier League non-top six team of the year so far