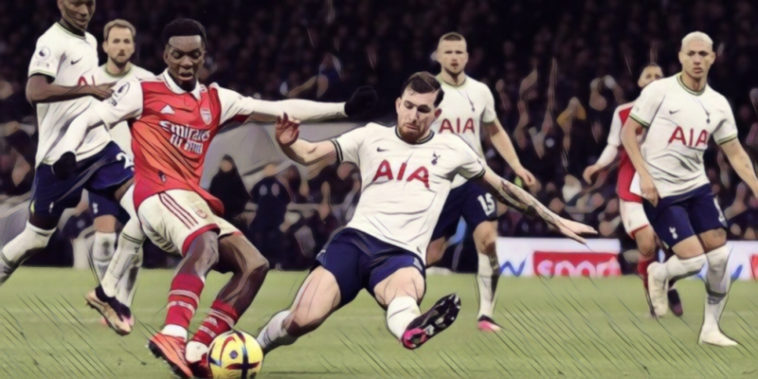 All is not well once again at Spurs after Antonio Conte’s were well beaten by bitter rivals 2-0 today at the Tottenham Hotspur Stadium.

Mikel Arteta’s title-chasing side started brightly and they almost took the lead through Eddie Nketiah after seven minutes, but the young striker struck straight at Spurs ‘keeper Hugo Lloris from 10 yards out.

On 14 minutes Arsenal’s attacking impetus would be rewarded, although it came from a massive mistake from Spurs skipper Lloris. Bukayo Saka broke down the right and after the England international played a deflected cross towards the near post Lloris bizarrely managed to palm the ball into his own net.

Spurs almost equalised a few minutes later through Son Heung-min, but Arsenal goalkeeper Aaron Ramsdale was alert to get off his line and block down the South Korean’s effort after a wonderful reverse pass from Ryan Sessegnon.

Arsenal continued to look the better side though and they nearly had a second when midfielder Thomas Partey hit a sensational volley from 25 yards out that rattled the woodwork.

The Gunners would eventually get the second goal their superiority warranted when their captain Martin Odegard fired a powerful daisy cutter into the bottom right-hand corner from 25 yards out.

Harry Kane forced Ramsdale into a fine stop with a near post header on the stroke of half time although such was the level of Spurs’ display they were roundly booed off by the home support.

Spurs upped the ante after the break and the impressive Ramsdale had to be at his very best to deny Kane and then Sessegnon from reducing the deficit.

Despite Spurs marked improvement, Nketiah had a golden chance to kill the game off on 68 minutes but the Arsenal forward once again fired straight at Lloris when clean through on goal.

In the end, man-of-the-match Ramsdale and the Gunners defence stood up to the test that Spurs provided and held on for another important win.

Speaking afterward Spurs boss Conte conceded that the better team won and even backed the Gunners to win the title.

“It was difficult to come back after we conceded two goals,” Conte told Sky Sports. ”When we conceded the first we had the possibility to level the game with Sonny and the keeper made a fantastic save. Then they scored the second goal. It could have killed everybody but not my players as in the second half we tried with big effort to score and create problems for Arsenal.

“The keeper made fantastic saves today. Arsenal is a difficult opponent now like Man City. Both teams are going to contend for the Premier League title.

“We played against a strong team but at the same time I’ve not got great disappointment for the commitment of my players. They showed great will and desire to try and come back. Sometimes in the past we did, but today I think their keeper was really good.

“Arsenal showed to be a really good team. It wasn’t easy for them to play against us in this atmosphere but the have a great balance and suffer in the right moments. They showed great resilience in the second half.

“When a team does this it means they are ready to fight to win the title with Man City I think they are the only two teams who can fight for the Premier League this season.”