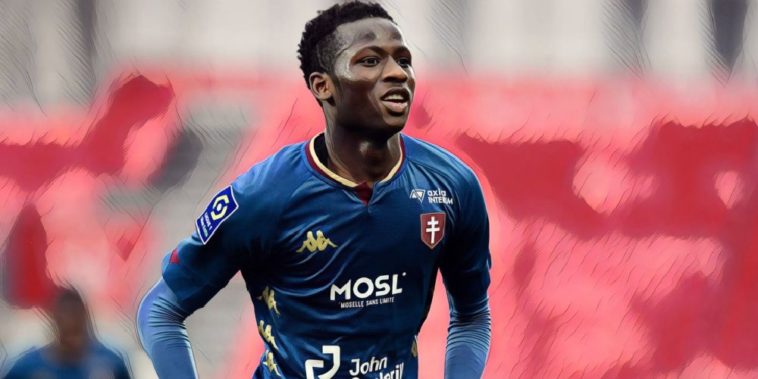 Tottenham Hotspur are said to be close to an agreement for highly rated Metz midfielder Pape Matar Sarr, amid interest from several other Premier League sides.

The Senegal international has caught the attention of a number of top sides across Europe after bursting onto the scene last season, the 18-year-old going on to net three times in 24 Ligue 1 appearances for his current club in the 2020/21 campaign.

Despite only making his first-team debut in November and signing a five-year deal two months earlier, the wonderkid looks like he could be on the move before the August deadline, with a long list of suitors after his signature.

In the last week, the Mail reported that Manchester United, Manchester City and Chelsea were all interested and were said to be ‘readying moves’ to clinch his signing.

However, The Athletic now say that Spurs are ‘nearing an agreement’ for the young starlet, albeit with the deal still to be finalised and personal terms still to be agreed.

That has left other suitors with a chance to still beat the north London club to his signature, although Tottenham look to have stolen a march on the chasing pack.

The report suggests that the selling club have two options regarding any sale; the first being a permanent departure for Sarr this summer for a higher price, while the second would see him leave for a lower fee but return to the club on-loan for the 2021/22 season, before eventually departing next summer.

The latter scenario is said to be the ‘preferred’ choice for Metz, with the club willing to pay his full salary during his loan stint, although they are not averse to cutting ties completely now should a suitable offer come in.

There is also interest from Serie A in the form of Atalanta, but the youngster’s desire is believed to be to secure a move to the English top-flight.

As for Spurs, they have already signed Cristian Romero and Pierluigi Gollini from Gian Piero Gasperini’s side, as well as Sevilla playmaker Bryan Gil, in a deal that saw Erik Lamela head in the other direction.

The club are already well-stocked in the midfield department, although there remains uncertainty over the futures of the likes of Harry Winks and Moussa Sissoko, while club-record signing Tanguy Ndombele is believed to have informed the club of his willingness to leave having failed to feature for new boss Nuno Espirito Santo thus far.