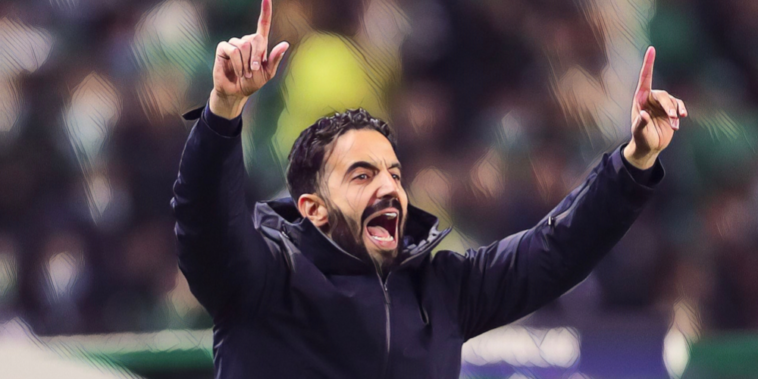 Sporting CP boss Ruben Amorim is reportedly being ‘monitored’ by Manchester United, amid the club’s search for a permanent successor to Ole Gunnar Solskjaer.

The Red Devils currently have Michael Carrick in caretaker charge following the Norwegian’s sacking last weekend, with the club’s statement announcing his departure outlining the plan for an interim coach until the end of the season, before making a permanent appointment in the summer.

United have seemingly settled on their temporary appointment with German coach Ralf Rangnick set to be confirmed as interim boss in the coming days, although that has not ended the speculation over who Solskjaer’s long-term replacement will be.

Recent reports have suggested that Mauricio Pochettino is the number one choice to take on the role, with Ajax boss Erik Ten Hag believed to be the ‘primary alternative’ to the Argentine, while Leicester City manager Brendan Rodgers has also been heavily linked with the job.

According to the Sun, however, a potential left-field choice has emerged in the form of Sporting coach Ruben Amorim, with Manchester United ‘keeping tabs’ on the 36-year-old.

The former Portugal international has been making waves in Lisbon after guiding the club to the league title last season, while he has also overseen a strong Champions League run thus far, with Sporting reaching the knockout stage at the expense of Borussia Dortmund.

Prior to joining the Primeira Liga side in March 2020, Amorim had only spent a few months in charge of Braga, although is seemingly thriving despite that lack of top-level coaching experience, winning 54 of his 73 games in charge at Sporting.

The report suggests that he is ‘on the radar’ of those at United, although any move would not come cheap with his reported release clause said to be worth an eye-watering £25.2m, his current side having previously paid £8.4m to prize him from his former post.

It would see unlikely that a move would come to fruition if Sporting were to demand such a figure, with reports having suggested that PSG would want around £10m to allow Pochettino to leave the Parc des Princes.