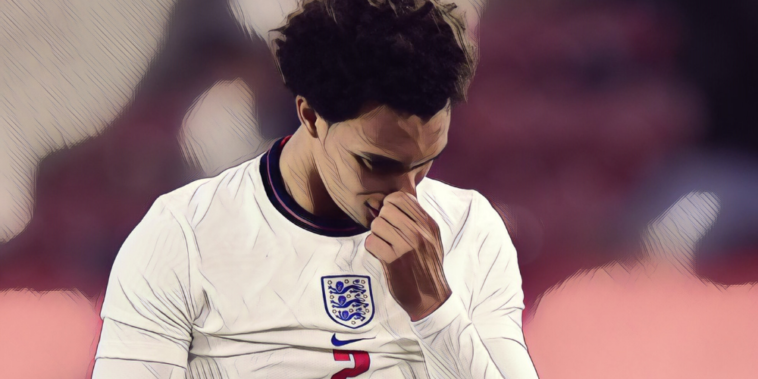 Gareth Southgate has discussed Trent Alexander-Arnold’s injury with the Liverpool defender a doubt for this summer’s European Championship after being substituted in England’s 1-0 win over Austria.

Alexander-Arnold started the victory in Middlesbrough with his inclusion in the squad having been a major talking point pre-match, Southgate having opted for four right-backs in his 26-man party given the wealth of depth available to the Three Lions.

The 22-year-old had been omitted from the squad for March’s World Cup qualifiers before being recalled, though his tournament now appears in doubt after sustaining a thigh injury late on in the clash.

“We’re going to have a little look. It’s obviously not good to see him come off in the way he did,” Southgate told Sky Sports.

“We’re just going to have to assess him in the next 24 hours. I think it’s a thigh injury, but the medical team are assessing him.

“We just have to see. The last thing you want is to see him come off in the way he did but will know more in the next 24 or 48 hours.“

Southgate admits that any form of injury makes a player a doubt with so little time to recover before the tournament, with England beginning their campaign against Croatia on June 13 at Wembley.

“We’re so close to the finals that for any player, injuries makes them a doubt. But we will just have to see over the next 48 hours.”

England are permitted to replace players for serious injury or illness following the June 1 date for finalising squads, though Southgate refused to comment on which player would be called upon should Alexander-Arnold be ruled out.

“Let’s see how Trent is first then we’ll go from there.”