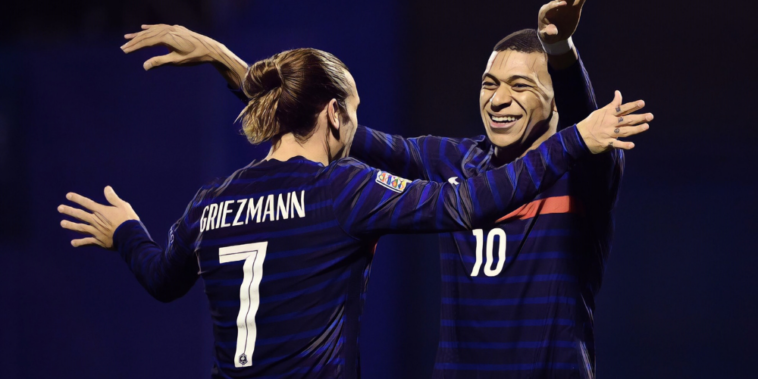 We’re now just over a week away from the start of the European Championship, with each of the competing nations having finalised their squads ahead of this summer’s rescheduled major tournament.

Portugal head into the competition as holders following their success at Euro 2016, though it’s arguably France who remain the team to beat after winning the World Cup in Russia two years later.

It promises to be a fascinating few weeks of football as Europe’s best compete to be crowned as the continent’s finest nation, and ahead of the tournament’s kick off we’ve decided to look at five teams in possession of elite firepower.

France will enter the tournament as world champions and have been drawn in the Group of Death, facing holders Portugal, perennial contenders Germany and Hungary in Group F.

Didier Deschamps’ charges will be confident of progressing to the latter stages however, Les Bleus boasting arguably the tournament’s most talented collection of players and incredible strength in depth.

One look at the attacking names omitted from their squad is enough to tell the story, with Alexandre Lacazette, Anthony Martial and Jonathan Ikone amongst those not included.

Kylian Mbappe remains the jewell in the French crown and will be key to their hopes of a successful campaign, though the headline news from Deschamps’ squad announcement was the return of Real Madrid forward Karim Benzema following a six-year exile from the national side.

The 33-year-old returns following the blackmail scandal that had appeared to end his international career, though will now team up with Mbappe as part of a formidable array of attacking options.

Some attackers Hungary defenders will come up against at the Euros:

Benzema has scored 87 goals across the past three seasons at club level, his inclusion in the squad another brilliant option alongside names including Antoine Griezmann, Olivier Giroud and Wissam Ben Yedder.

Add in wide players of the calibre of Kingsley Coman – back in the squad after missing the World Cup triumph three years ago – Ousmane Dembele and Marcus Thuram, and France have all the ingredients to make it back-to-back major tournament wins.

Belgium will arrive at the European Championship as the number one ranked nation in world football according to FIFA, in what could arguably be the last chance at silverware for several members of the Red Devils’ ‘Golden Generation’.

Stalwarts of the side Toby Alderweireled, Jan Vertonghen, Axel Witsel, Eden Hazard and Dries Mertens are all the wrong side of 30 and Roberto Martinez will be tasked with improving on the country’s third-placed finish at the World Cup three years ago.

Central to his side’s success will be Romelu Lukaku who arrives into the tournament on the back of the best season of his club career, having inspired Inter Milan to the Serie A title in 2020/21.

The 28-year-old was directly involved in more goals than any other player in the division, scoring 24 goals and providing a further 11 assists, whilst he is Belgium’s record scorer with 59 goals in just 91 caps.

Lukaku will be ably supported by the aforementioned Mertens and Hazard and Belgium will hope to coax the best from the latter following a disappointing spell at Real Madrid, the captain having won the FIFA World Cup’s Silver Ball award in 2018.

Kevin De Bruyne will be the man tasked with providing chances to that trio as Belgium look to end their wait for major tournament success.

England have been down this road before, possessing one of the most talented squads at a major tournament only to fail to live up to expectations.

It is difficult not to champion the Three Lions’ credentials however, given the wealth of attacking talent available to Gareth Southgate heading into a rescheduled Euro 2020.

English footballers have previously been viewed as less technically gifted than their contemporaries on the continent, but a new generation including the likes of Phil Foden, Jack Grealish and Jadon Sancho contradict that once widely-held view.

England are young, vibrant and inventive and it will be left to Southgate to find the best combination when the Three Lions take on Croatia, Scotland and Czech Republic in Group D.

The manager faces a decision to make with favourites Raheem Sterling and Marcus Rashford having endured indifferent periods of late, and with competition for places fierce both players face a fight to make the starting XI.

Creating opportunities for Harry Kane will be vital to England’s hopes of making an impression, the Tottenham forward having finished as the leading goalscorer and assist provider in the Premier League in 2020/21.

Kane will be hoping to add to the World Cup Golden Boot he collected three years ago, with the forward now sixth amongst England’s all-time leading scorers with 34 goals in just 53 caps.

Of the five names above him, only Jimmy Greaves can better Kane’s goal-per-game ratio.

Portugal will be looking to become just the second team to make it back-to-back European Championship successes, having ended the nation’s long wait for silverware with a victorious Euro 2016 campaign.

Fernando Santos’ side possess a trump card in having arguably Europe’s finest footballer amongst their ranks once again, Cristiano Ronaldo remaining at the pinnacle of the sport despite being set to celebrate his 37th birthday later this year.

Ronaldo is also closing in on Iran’s Ali Daei’s record of 109 international goals and will hope to move closer to that landmark as he bids to propel Portugal through the tournament’s Group of Death.

Premier League names in Bruno Fernandes, Bernardo Silva and Diogo Jota are amongst the forward talents that will compliment the five-time Ballon d’Or winner, whilst budding superstar Joao Felix is also part of the travelling squad.

Eintracht Frankfurt’s Andre Silva will be hoping for involvement after a stunning 28-goal season that saw him outscore Erling Haaland in the Bundesliga, whilst youngster Pedro Goncalves – a reported transfer target for Manchester United – is also in the squad after inspiring Sporting Lisbon to title success.

Major tournaments rarely begin without Germany being mentioned amongst the contenders, though expectations have been tempered for Die Mannschaft heading into Euro 2020.

That could suit Joachim Löw who will bow out following this summer’s finals, the World Cup winning coach set to step down after 15 years in charge – a period in which the Germans have reached the semi-finals of a major tournament or further on six occasions.

Löw has chosen to recall Thomas Muller amongst his attacking options after previously bringing an end to the Bayern Munich star’s international career, the 31-year-old having provided a league-leading 18 assists in the Bundesliga this season.

Muller also provided more assists than any other player in 2019/20 with a record-breaking 21, his invention perhaps crucial to getting the best from a German forward line where goals from wide could prove crucial.

Bayern teammates Serge Gnabry and Leroy Sane offer one of the best wing pairings at this summer’s tournament, whilst Chelsea duo Kai Havertz and Timo Werner could compete for a central attacking role, alongside Monaco’s Kevin Volland.

Werner has endured a testing season with Chelsea this term despite Champions League success, but possesses a strong record at international level with 15 goals in 38 caps.