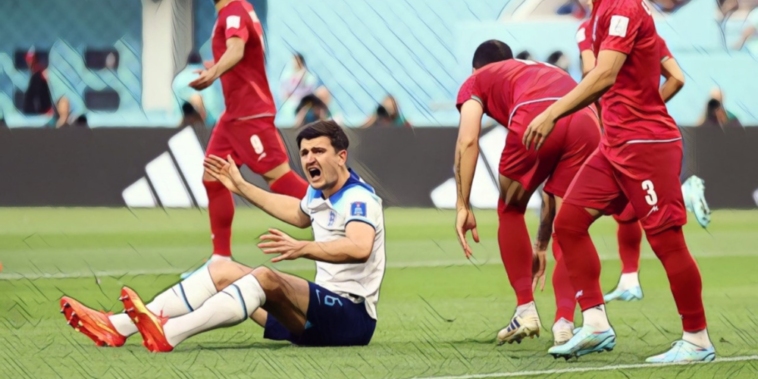 England have sought clarification on penalty decisions following inconsistencies from officials at the World Cup in Qatar.

Gareth Southgate’s side were denied a spot-kick after Harry Maguire was blatantly hauled to the ground during the 6-2 win over Iran on Monday, before the Iranians were awarded a late penalty following a somewhat less obvious shirt-pulling incident involving Eric Dier.

Argentina were also awarded a penalty following grappling inside the penalty area against Saudi Arabia, though there have been inconsistencies in the decisions awarded to date.

Southgate is understood to have been concerned after England were used as an example by Pierluigi Collina – chairman of the FIFA referees committee – pre-tournament. The Italian had shown officials an incident which saw Kalvin Phillips block Albanian defenders to allow Harry Maguire to score in November, as an example of a goal that would be ruled out in Qatar.

“Well, what worries me is we were used in an example in the referee’s video,” Southgate said.

“And what we were shown, the incident in the first half, we were told that would be a definite penalty, the second half, maybe there’s a shirt pull, we’ve got to be better on that but I’m a bit worried we were the example shown, and then to get a decision as happened in the first half, we need some clarification really as to how it’s going to be.

“That happened in Russia actually, and we’ve got to have that dialogue with Fifa and just make sure… we want clarity, otherwise, we don’t know where we stand.

“Goals are going in and we don’t know whether they stand or not. The bit that worries me is we were the example we were shown.”