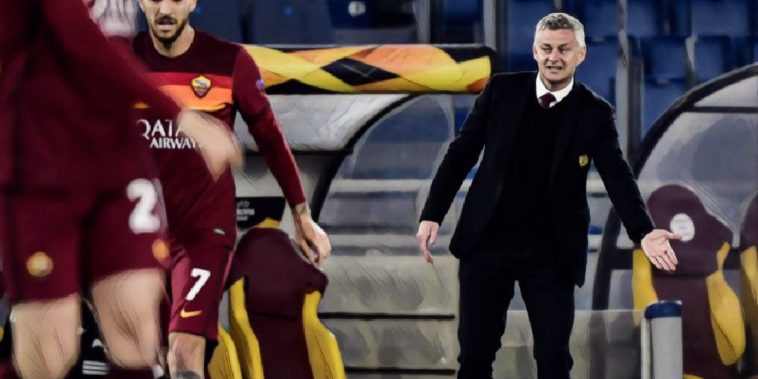 Manchester United overcame their semi-final hoodoo to progress to their first major final since 2017 after a dramatic 8-5 aggregate win over AS Roma, despite suffering a 3-2 defeat in an enthralling second-leg in the Stadio Olimpico.

Despite their significant first-leg advantage and the Red Devils upcoming hectic fixture schedule, Ole Gunnar Solskjaer opted for a strong starting lineup, making just three changes from the side that played at Old Trafford last week.

United would squander two glorious chances to extend their advantage, Edinson Cavani first dinking onto the bar, before the Uruguayan smashed an effort straight at Antonio Mirante minutes later.

Another fine save at the other end from De Gea denied Lorenzo Pellegrini, before Cavani finally broke the deadlock, the veteran striker latching onto an excellent Fred through ball and firing home in his usual lethal manner, to make it a third goal in the tie for the former Napoli man.

With United seemingly coasting in the tie, the home side set up a nervy finish with a quick-fire double, Edin Dzeko nodding home from Pedro’s initial effort on goal, before sloppy play on the edge of the box from Fred allowed Bryan Cristante in, the Italian firing home excellently into the top corner.

The Italian side could have had a third almost immediately, yet De Gea once again brilliantly denied Dzeko’s bullet header, before the Spaniard pulled off a rather more fortuitous block to deny ex-teammate Mkhitaryan from point-blank range.

After that crazy few minutes, United began to find their rhythm again and should have drawn level on the night through Mason Greenwood, yet the teenager uncharacteristically fired wired. His blushes were spared just moments later, however, as Cavani added his second of the game with a trademark run and header, latching on to a sublime Bruno Fernandes ball.

While Roma would secure a 3-2 win on the night courtesy of a late Nicola Zalewski strike, their huge first leg advantage saw United finally make it past the last four stage under Ole Gunnar Solskjaer, the Norwegian admitting his delight at reaching the showpiece, albeit while also admitting his side weren’t quite at their best.

“It feels good to be in the final,” he told BT Sport. “We played one very, very good half at Old Trafford which has taken us through. I’m disappointed we lost – especially the way we played in the second half.

“It could easily have been 8-6 to them. It was a strange game. We kept giving them the ball but luckily we have one of the best keepers in the world. We are in the final and are looking forward to 26 May.”

The Red Devils have no time to revel in their semi-final triumph as they prepare for an intense schedule over the next week following last Sunday’s postponed meeting with Liverpool. Thursday night’s clash in Rome is the first of four games in just seven days, before facing Aston Villa on Sunday, Leicester on Tuesday and then their rearranged fixture against Liverpool on Thursday, a situation that Solskjaer described as ‘impossible’.

“It’s unheard of. It’s made by people who have never played football at this level,” Solskjaer responded.

“It’s physically impossible for the players. We have not been dealt a good hand. We are going to need everyone for these four games. It’s a short turnaround but we have to be ready.”