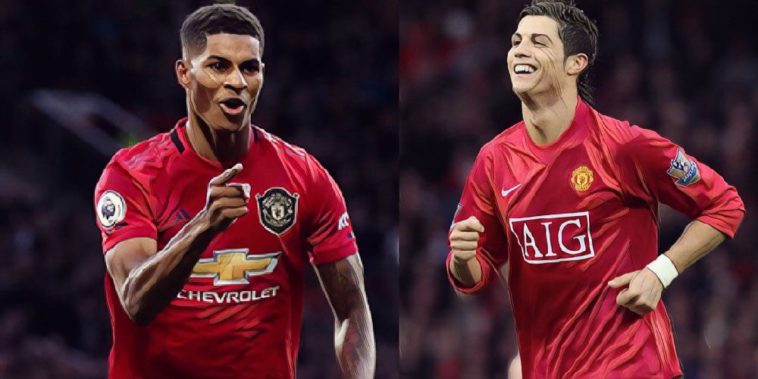 Ole Gunnar Solskjaer has discussed the growing ‘similarities’ between Marcus Rashford and Cristiano Ronaldo with the Manchester United number 10 currently enjoying the form of his life.

There have been high hopes for Marcus Rashford ever since he burst onto the scene as a raw 18-year-old back in 2016, though there has also been plenty of debate about the forward’s best position, with his goalscoring record having been heavily scrutinised over the years.

So far, Rashford has netted 58 goals in 191 appearances for Manchester United, though with just 16 Premier League games played this season, he has already equalled his best goalscoring campaign, netting 10 times in the league.

After an underwhelming spell as a central striker in the opening weeks of the campaign, the 22-year-old has excelled since being pushed back out to the left, scoring 13 goals in his last 14 outings for club and country, his style of play and physique starting to resemble that of former Old Trafford hero Cristiano Ronaldo.

Ronaldo, of course, has gone on to become one of the games greatest ever players, and United boss Ole Gunnar Solskjaer has admitted that he sees the similarities between the pair.

“Of course it’s hard to say with certainty that he’s going to be as good as Cristiano, but you can see the similarities more and more in terms of Marcus’ traits on the pitch,” Solskjaer said at a press conference at Old Trafford.

“He can play through the middle, he can play as a number nine, he can cut inside from the left and finish. He can even play on the right, as Cristiano did when he came here. He’s got the same physical stature and more or less all of his attributes are very, very similar. Even their stats are similar, in terms of goals scored after a certain amount of games.”

In the latter days of his playing career, Solskjaer played with the Portuguese before moving onto the Manchester United coaching staff, and the Norwegian has admitted that Rashford is ‘pushing himself’ just as Ronaldo did at a similar age.

“You have to remember that, as well as playing with Cristiano, I coached him in my first year as a forwards coach here,” he says. “Both players are very professional, very dedicated, very in love with football. And you can see that Marcus is getting more of a taste for that now, both with us and with England. He is pushing himself and seeing the results.

“Cristiano always had one mindset. He was going to be the best in the world. Everything he did was about being the best in the world. We had Christmas dos, we had parties, but Cristiano was always calm and collected. He never went all-out like some of us did. Marcus has that same mindset and ambition. He has already matured in the 12 months I’ve been here.

“Cristiano developed that knack for scoring later on in his career,” Solskjaer added. “To begin with he was very skilful, he went past people and scored some wonder goals, but in the end he started scoring proper goalscorer’s goals. That’s what I’m hoping to develop with Marcus as well.”

Solskjaer will be hoping that Rashford can extend his excellent goalscoring form when Manchester United host Everton on Sunday, the Red Devils going after a fourth consecutive win in all competitions, a game which offers United the opportunity to close the gap to fourth-placed Chelsea down to just two points.