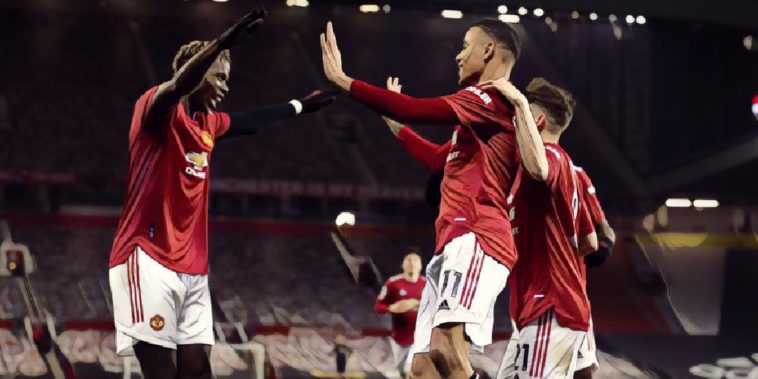 Mason Greenwood was the hero as Manchester United came from behind to claim a 2-1 win against a well-drilled Brighton to bolster their hopes of finishing in the top four.

It was a bright opening spell from Manchester United, who dominated the ball and looked to be playing with a real confidence, Mason Greenwood striking the post with an effort inside the opening 10 minutes.

However, it would be Brighton who would take the lead through former Man Utd man, Danny Welbeck. A loose pass from Paul Pogba in midfield saw Brighton work the ball to Neal Maupay who put in a lovely cross from the right. Welbeck saw his initial header saved by Dean Henderson before the 30-year-old poked home the rebound.

Danny Welbeck is the first player to score as many as three #PL goals against Man Utd after leaving the club#MUNBHA pic.twitter.com/6JFDTm5NhG

After their bright start, United quickly seemed to run out of attacking ideas for the remainder of the first half, their play far too slow and hopeful as opposed to playing with any real ideas or intent, Brighton looking really organised and comfortable in defence.

However, the Red Devils would finally produce a moment of quality just after the hour mark, Bruno Fernandes leading a breakaway for the hosts before choosing the perfect moment to release the ball into Marcus Rashford, the England international opening up his body and rolling it first-time past Robert Sanchez.

United have often been better in second halves this season, and they would once again turned things around to haul themselves in front with seven minutes to play. Bruno Fernandes lifted a cross to Paul Pogba on the edge of the box, and while the Frenchman totally fluffed his attempted volley, the ball dropped invitingly for Mason Greenwood who produced a diving header past Sanchez with Ben White agonisingly unable to clear it off the line.

United held on amid a late Brighton rally and speaking afterwards, Ole Gunnar Solkskaer admitted his side has to earn the points ‘the hard way’, while expressing his delight for former academy graduate, Welbeck.

“It’s always difficult to play Brighton. We have had good results and we’ve had to earn them the hard way. We managed to find a way in the second half,” he told BBC Sport.

“Danny [Welbeck] was in the reserves when I was the coach. He is a big talent. It’s great to see him back playing football with all the injuries he has had. We gave it away sloppily [for his goal]. Dean [Henderson] makes a good save first but then the rebound comes in. We had to come in at half time and compose ourselves as we didn’t create much after they scored.”

Manchester United have gained 25 points from losing positions in the Premier League this season, more than any other side:

Before Sunday’s game, Mason Greenwood had only scored once in the league this season, and the Norwegian was also pleased to see the teenager back among the goals, particularly with a header.

“Mason was mature. Today he was one of our brightest players. He was clean, he was tidy and he got the goal. It’s a header inside the six-yard box and that’s what we need more from Mason.”

The Red Devils boss also made a statement by picking Dean Henderson over David de Gea between the sticks, with suggestions that the Spaniard could be let go this summer, although Solksjaer insisted that De Gea will ‘definitely’ play for the club again.

“I’ve got two great keepers, two numbers 1s,” he said. “David de Gea spent a while back home and then he had internationals so he hadn’t played for about a month. He’ll definitely play football for us again.”

Next up for United is a Europa League quarter-final first leg game against Granada, before facing Spurs in the league next Sunday.