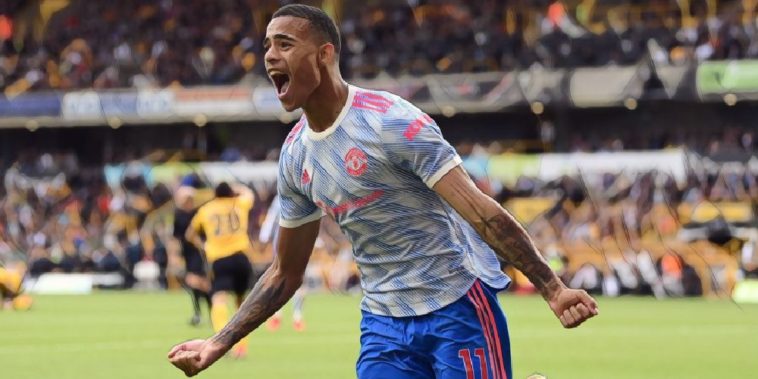 Manchester United put in a wildly underwhelming display at Molineux but still came away with all three points as Mason Greenwood scored the only goal of the game to beat Wolves 1-0.

It was Wolves who instantly looked the more threatening of the two teams, with Raul Jimenez seeing an effort saved following a driving run by Adama Traore, while on loan Francisco Trincao saw his effort blocked by Aaron Wan-Bissaka after capitalising on a couple of mistakes by Fred.

The Red Devils really struggled to get a foothold in the game during the first half, with a whole host of players guilty of giving the ball away cheaply in midfield as Wolves continually looked to take advantage and hit on the break, with the pace of Traore a constant threat.

Manchester United did look a little more composed after the break, with Paul Pogba – operating in a deeper and more central role – regularly looking to play balls in behind the Wolves backline.

Wolves came into the game without a point and without a goal from their opening two matches, though it hasn’t been for the want of trying, and they were again denied an opener as David de Gea produced a superb double save in the 69th minute to twice deny Romain Saiss from close range from a Joao Moutinho corner.

The Black Country club would however be once again made to pay for their profligacy in front of goal, as Mason Greenwood – who had started the game centrally before being shifted to the right – received the ball from Raphael Varane. The teenager was shown onto his supposedly weaker right foot, before firing a low strike across goal, which goalkeeper Jose Sa got a tame hand to and couldn’t prevent from flying into the back of the net.

Adama Traoré completed more take-ons (8) and created more chances (4) than any other player vs. Man Utd.

The goal was tinged with controversy, however, Paul Pogba catching Ruben Neves in a 50-50 challenge in the buildup, though Mike Dean nor VAR felt the challenge justified the awarding of a free-kick.

However, the Red Devils would hold on to all three points to move them two points behind early league leaders Spurs and set a new Premier League record of 28 games unbeaten away from home, and speaking afterwards, Ole Gunnar Solskjaer said the win helped make up for last weekend’s draw against Southampton.

“It’s been a good week, seven points on the board,” he told BBC Sport. “We said last week after the draw, if we win the next one, it might not be a bad draw.”

David de Gea has endured a torrid couple of years as he faces a battle with Dean Henderson to be Man Utd’s number one, and Solskjaer said he was delighted with his ‘determination’ following his impressive double save.

“The first one, he was in the right position, but the second one’s special, how he reacts and gets a strong hand to it. I have to say David has come back with a determination in his work and I’m delighted for him.”

The United boss was critical of the refereeing in the buildup to Southampton’s goal last week as the referee failed to give a free-kick for a challenge on Bruno Fernandes, but he unsurprisingly didn’t feel that Pogba’s challenge on Neves was a foul.

“Last week I was complaining because we didn’t get a foul – it’s the way of the game now. They want it flowing, they want more lenient refereeing.

“I don’t think it’s a foul, I think two of them go for the ball and it’s a good tackle by Paul [Pogba].

“It has to be consistent, but it will take a few weeks to find that correct line. We were told before the game today that the referee would let the game flow. With the crowd, the passion, the game was all about passion in the crowd and on the pitch.”

“It’s special. To get the shot on target from that angle is good, of course the keeper maybe could have saved it but he hit it so quickly. The beauty of him is that he can go outside right foot and inside left foot, so it’s hard for a defender.”

Mason Greenwood in the Premier League so far this season:

An insanely clinical start to 21/22. 🧨 pic.twitter.com/0wsUvTjiSD

Meanwhile, on debutant Raphael Varane he added: “He was class. Composed, experienced, good on the ball, in the air. He’s got everything as a centre-back so I’m delighted with his performance.”

Next up for United is a home game against Newcastle when the club will be hoping a certain Mr Ronaldo will make his second debut for the club following his sensational return on Friday.

“I hope he will [make his debut],” he said. “We’re working to get that done. He’s a special boy, or man now, he was a boy when I played with him. Of course we want to get that over the line.

“Of course the players are excited, some have played with him in their national team. You see the fans – they’re excited. That’s what he does, he’s a special player.”