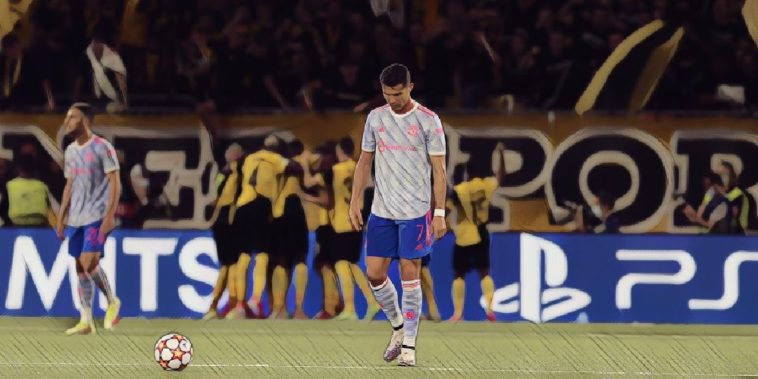 The Red Devils ran out 4-1 winners over Newcastle at the weekend, as Cristiano Ronaldo stole the headlines with a brace on his return, and the Portuguese picked up where he left off as he opened the scoring in Bern early on.

Man United had dominated possession in the early stages, and in the 13th minute, Bruno Fernandes would receive the ball on the left, before sending in a sumptuous outside-of-the-boot cross to his international teammate. Ronaldo met the ball at the back post and poked it between the legs of despairing goalkeeper, David von Ballmoos, who despite getting a touch, was unable to prevent the spinning ball from crossing the line.

The Red Devils would, however, be reduced to 10 men 10 minutes before the interval as Aaron Wan-Bissaka was shown a straight red card. The full-back misjudged his challenge as he stretched into a tackle on midfielder Christopher Martins, going over the top of the ball and clattering into the ankle of the Luxembourg international before receiving his marching orders.

The red card would massively alter the flow of the game and the Swiss champions quickly looked to capitalise on their man advantage and went close through Christian Fassnacht who fizzed a volley narrowly wide, while had a number of efforts from distance.

The sending off had seen Jadon Sancho immediately removed and replaced by Diogo Dalot, before Ole Gunnar Solskjaer withdrew Donny van de Beek at half time for Raphael Varane as he changed to a back three in a bid to strengthen defensively.

Young Boys had the vast majority of the ball as the Red Devils struggled to string two passes together, though they rarely threatened the United goal, with a number of shots coming from outside the box.

However, they would finally produce a moment of quality midway through the second half as Meschak Elia got down the right and fizzed a ball into the box, Nicolas Moumi Ngamaleu getting in front of his man to stab home from close range.

Young Boys had 69% possession, 11 shots and scored 2 goals in the second half, Man Utd didn’t have a single shot.

Made the extra man count. 👊🟡 pic.twitter.com/yRrtq4Ox6H

Just as it looked as though Manchester United would grind out a point, they would throw it away with virtually the last kick off the game as substitute Jesse Lingard played a slack back pass toward De Gea in the 95th minute. That pass was pounced upon by Jordan Siebatcheu who coolly slotted past the Spanish ‘keeper to send the Wankdorf stadium wild.

Speaking after the game, Ole Gunnar Solskjaer pointed to the first half-red card as a major turning point in the match

“It looked like a well-earned point and a good point in a difficult game,” he told MUTV. “When you get the first goal you think you’ve got a great chance, it’s enough to win the game but unfortunately that sending off will always have an impact.

“Aaron gets a touch that’s too far, and he gets the ball but he follows through. It’s hard to argue against the referee but then again he didn’t go through his ankle, he hit him on the top of his foot. It was never a malicious tackle.”

The Norwegian explained his decision to switch formations at half-time: “You saw the signs towards the end of the first half that they were going to switch it and get crosses in with the wing-backs,” he said.

“I thought we coped really well. We were a bit lazy going out and blocking the cross for the first goal, a bit unlucky because it then gets deflected off Luke, and then the last goal, that’s just unfortunate.”

The United boss admitted that the defeat was a ‘missed opportunity’, but said his side still have plenty of opportunities to pick up the necessary points to qualify for the knockout stages.

“We need 12 points to go through. You need to win your home games, win one away from home and go through. A missed opportunity tonight, of course, but then again last year we won our first two games against PSG and Red Bull [Leipzig] and everyone thought we were through. So we have five games to get the 10 or 12 points.”