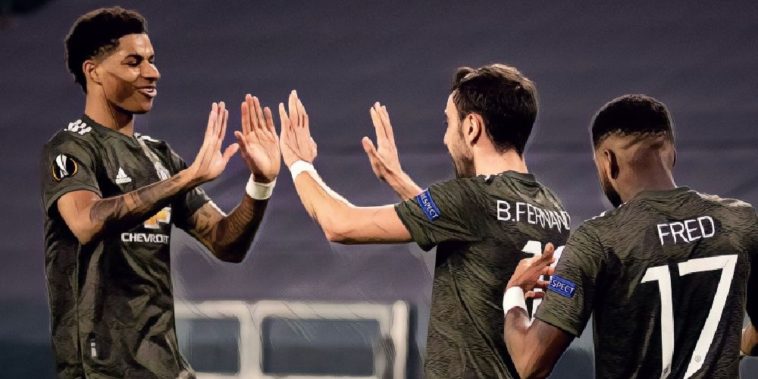 Manchester United almost certainly booked their place in the Europa League last 16 with a convincing 4-0 win over Real Sociedad, a game played in Juventus’ Allianz Stadium due to Covid restrictions in Spain.

The game got off to an absolutely electric start, former Man Utd number 11 Adnan Januzaj seeing a curling effort drift agonisingly wide, while both ‘keepers were forced into saves inside the opening three minutes.

Manchester United squandered a chance to take a lead in the 19th minute, Bruno Fernandes leading a rapid counter-attack, the influential midfielder finding the unmarked Marcus Rashford in the middle, though the England international could only fire straight at the ‘keeper, while Fernandes’ headed follow-up was cleared off the line.

United did however take the lead eight minutes later, Rashford playing a ball in behind the Sociedad defence in towards Fernandes, the Portuguese intelligently biding his time as the La Liga side’s defenders got themselves in a right old mix up, the 26-year-old being left with a simple task of passing the ball into the back of the empty net.

Rashford played another well-weighted ball as United doubled their advantage in the 58th minute, his pass being dummied by Fernandes and finding Dan James, who in turn cushioned the ball into the midfielder’s path before he finished with a tidy first-time finish from the edge of the box, the goal eventually being awarded by VAR after initially being ruled out for an offside.

Rashford finally had one of his own in the 64th minute, the 23-year-old timing his run excellently to get onto a threaded pass from Fred before sliding it wide of the reach of Alex Remiro in the Sociedad goal to make it three.

Dan James saw an effort ruled out for an offside and also saw one saved by Remiro as United put in a thoroughly attacking performance in Turin, though the Welshman finally found the back of the net as the game ticked into added time, racing down the right before slotting past the Spanish ‘keeper.

Speaking afterwards, Ole Gunnar Solskjaer said his side are still a work-in-progress, coming into the game with a run of just two wins in their last six outings.

“We scored some good goals and played some nice football,” he told BT Sport. “We deserved to win but maybe not by four goals. On a night like this when we find spaces we can be a dangerous team.

“We had to defend well, they have some terrific players up front and we earned the right to counter-attack quickly. They opened up and we got the spaces we wanted.

“Every team attacks you, it’s about finding the moments to find the space. We are a work in progress, we are learning and some games we have not been able to win lately.”

Next up for Man Utd is a home game against Newcastle before the return leg against Sociedad at Old Trafford next week.