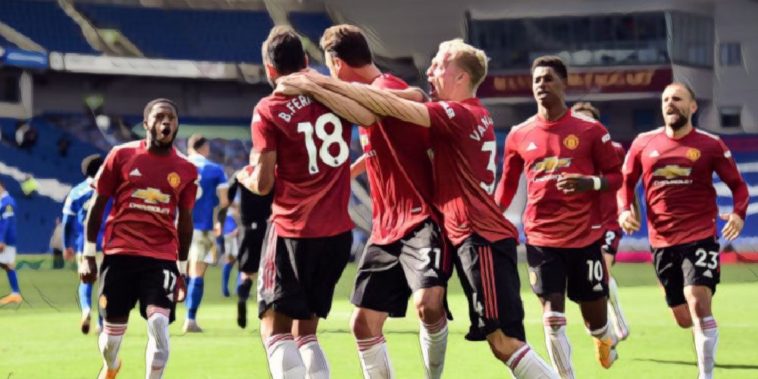 Manchester United got their Premier League points tally off the mark with a 3-2 win over Brighton at the Amex, the Red Devils securing a dramatic winner from the spot in the 100th minute.

United were lacklustre for much of the match and very nearly fell behind in the ninth minute, the influential Leandro Trossard setting himself from 20 yards before seeing his effort cannon off David de Gea’s right-hand post.

12 minutes later, the Belgian was again afforded too much space and allowed to shoot from the edge of the box, though once again, he saw his effort clip the base of the post as Brighton imposed themselves on the visitors.

Brighton continued to dominate, and with five minutes of the first half to play, United conceded their second spot-kick of the season. Bruno Fernandes caught the advancing Tariq Lamptey before Neal Maupay despatched a cheeky panenka past David de Gea.

The Red Devils weren’t behind for long though, a driving run forward from Luke Shaw earning his side a free-kick left of the box. Bruno Fernandes’ fizzed delivery across goal found Nemanja Matic at the back stick, the Serbian quickly stabbing the ball back into the middle which was poked home by Harry Maguire, though replays showed it came off defender Lewis Dunk.

Almost immediately after the restart, Brighton were awarded another penalty for an apparent foul by Paul Pogba on Aaron Connelly, though Solskjaer’s side were handed a reprieve by VAR, replays suggesting the Irishman had instigated the initial contact between the pair.

United started the second half much brighter, and within 10 minutes they were in front. A raking pass into space from Bruno Fernandes finding the onrushing Marcus Rashford who raced into the area. The England international then showed great skill and patience before rifling in his second of the season with his left.

That is absolutely brilliant by Marcus Rashford 🔥

Man Utd's number 🔟 takes things into his own hands after a brilliant ball through by Bruno Fernandes!

Sat the defender down twice… pic.twitter.com/wgEcrFuab1

After the goal, Brighton started to dominate once more, but were again denied by the woodwork, Solly March’s strike crashing off the upright before agonisingly rolling in front of the goal line, before Trossard hit the frame of the goal for a third time as he saw his effort smashing against the bar.

The Seagulls did eventually get themselves level in the 95th minute of the game, March heading home at the back post for what looked like a hugely deserved point, before the game took one more dramatic twist.

A Manchester United corner saw Harry Maguire’s effort headed off the line before referee Chris Kavanagh blew for full time. However, he was met with a barrage of protestations from United players who were appealing for a handball. Despite having blown the whistle, Kavanagh referred to the pitchside monitor to see the ball strike Neal Maupay’s arm, leaving the ref no choice but to award the visitors a last gasp spot-kick.

Having given away the penalty in the first half, Bruno Fernandes made amends to open his goalscoring account for the campaign, sending Mat Ryan the wrong way with the last kick of the game in the 100th minute.

Speaking afterwards, Ole Gunnar Solskjaer admitted his side were fortunate to get anything out of the game, but was pleased with their ‘character’.

“We got away with one. Maybe one point we deserved, we didn’t deserve more. But the character deserved more,” Solskjaer told BT Sport.

“Last season we had too many draws, so that is a big plus for us. You have to be happy Jose is not here to measure the goalposts.

“They are a difficult team to play against. We don’t have the legs and sharpness but we will get there. We have plenty of work ahead.”

The two sides go head-to-head at the AmEx again on Wednesday night, the pair having been drawn together in the fourth round of the Carabao Cup.

See also – All or Nothing: 13 of the best moments from the Tottenham Hotspur documentary