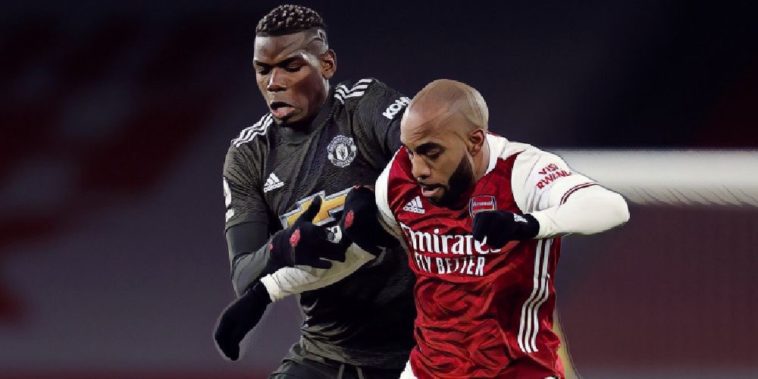 Arsenal and Manchester United played out a goalless draw on a cold night at the Emirates, in a game both sides will come away from feeling they could have won.

Arsenal had overcome their worst ever start to a Premier League season and came into the game on the back of a six game unbeaten run in the league, while Manchester United had just seen their long unbeaten run ended in shock circumstances in a 2-1 loss to Sheffield United in midweek.

It would be Manchester United who had the most presentable chances in the opening period, Brazilian midfielder Fred seeing a curling effort from the edge of the box tipped away by Bernd Leno on 20 minutes, while Bruno Fernandes curled an effort marginally wide after cutting inside David Luiz down the left.

Arsenal started much the brighter side after the break, with Aaron Wan-Bissaka and Harry Maguire both making vital blocks in the opening five minutes to prevent the Gunners from taking the lead.

Alexandre Lacazette saw a quickly taken free-kick come back off the bar while Emile Smith Rowe forced a save out of De Gea as Arsenal had the best passages of play after the break.

Not the result we wanted – but that's a club record 1️⃣8️⃣ #PL away games unbeaten for the Reds.

Something to build on 💪

Speaking afterwards, Ole Gunnar Solskjaer felt his side had the ‘better chances’ to win the game.

“Good performance, two massive chances in the second half but unfortunately it wasn’t to be,” he summed up to Sky Sports. “We had the greater share of possession, the better chances, there was a spell in the second half we dropped off but apart from that I’m pleased with the boys.

“I felt we had the upper hand but didn’t get Paul [Pogba] in the game and we wanted him to get on the ball more and Anthony [Martial] to drive at them. We wanted Paul to dictate the play more.”

Despite picking up just one point from their two games this week, Solskjaer insisted he wasn’t disappointed with only taking a point away from the Emirates.

“It [was] definitely a disappointing one [to lose against Sheffield United]. Today they did what they should do. You can’t control if they take the chances or not.

“We take the point and move on to Southampton on Tuesday. It’s like an NBA season this, on the road again.”

Next up for Manchester United is home tie against Southampton on Tuesday evening, before they host Everton next weekend.