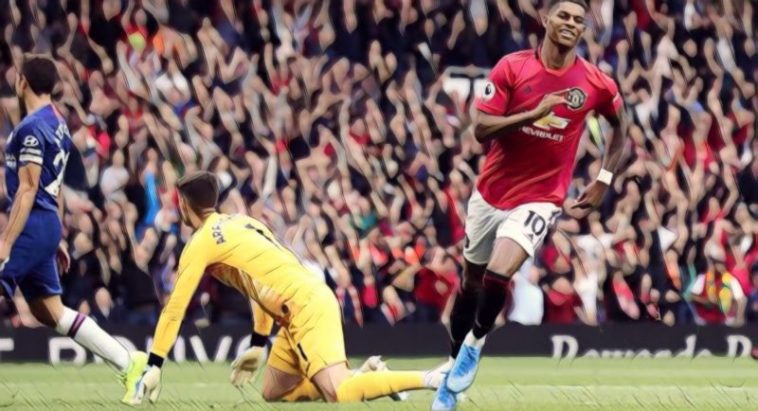 Manchester United boss Ole Gunnar Solskjaer was full of praise for Marcus Rashford after the attacker bagged a brace in his sides 4-0 thrashing of Chelsea at Old Trafford today.

Frank Lampard’s young Chelsea side dominated the opening exchanges and came within inches of taking the lead when Tammy Abraham hammered a shot against the post from the edge of the area.

However, Manchester United took the lead on 18 minutes when Marcus Rashford smashed home a penalty after the English striker was clumsily taken down in the area by Blues centre-back Kurt Zouma.

United upped their game after the opening goal, although Chelsea continued to create openings and Lampard would have been disappointed his side went in at the break one down after Emerson hit the post and Ross Barkley forced David De Gea into an excellent reaction stop.

Chelsea continued to push and probe after the break, but United would kill the game off in the space of a couple of minutes when Anthony Martial finished from close range and Rashford bagged his second after a sublime through ball from Paul Pogba.

279 – Manchester United have never lost a @premierleague match at Old Trafford when leading at half-time, drawing 16 and winning 263 of their 279 such games. Jinx? #MUNCHE pic.twitter.com/L0UipgOudF

Summer signing Daniel James then came off the bench to put some extra gloss on the scoreline by hitting a debut goal late on after a slick counter-attacking move.

Speaking after the game Solskjaer waxed lyrical about how Rashford had performed during his sides opening day win.

“Once in a while he is caught out defensively but that means he can counter-attack. His second goal was absolutely outstanding, that’s where we want him running in behind and not on the touchline crossing in.

“Martial’s goal was a typical number nine goal, that’s where I want him and he knows that. That’s where the number nines get the goals.”

United’s transfer dealings this summer have been the subject of much criticism, although Solskjaer insisted that he is really happy with the players his club brought in over the close season.

“Dan has made a great impact and it is the best feeling ever scoring a goal in front of the Stretford End, you can’t beat that.”