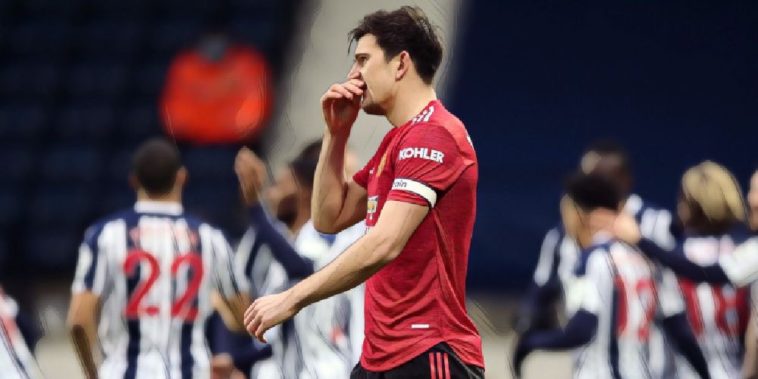 Manchester United’s stuttering run of form continued as they struggled to break down the Premier League’s leakiest defence as West Brom held them to a 1-1 draw.

The Baggies got off to the perfect start inside two minutes, Connor Gallagher putting in a delicious cross which was attacked by January signing Mbaye Diagne, the Senegalese striker taking advantage of some timid defending by Manchester United, beating Victor Lindelof in the air before heading past De Gea from six yards.

United dominated possession after going behind, but in truth, created very little for the vast majority of the first half, with Big Sam’s side keeping it compact in their search of vital Premier League points.

However, the Red Devils did get themselves level just before the interval with a real moment of brilliance, Bruno Fernandes volleying past Sam Johnstone with his weaker left foot, the Portuguese’s finish all the more impressive given that Luke Shaw’s cross was dropping behind the midfielder.

United came out with a bit more purpose in the second half, although both sides had the chances to win the game. Johnstone made a good save to deny Mason Greenwood while Scott McTominay’s effort on the rebound was cleared off the line.

The visitors were also awarded a penalty for foul on Harry Maguire, though Craig Pawson overturned his decision after reviewing the pitchside footage, even though the United defender appeared to be a good yard offside.

West Brom goalscorer Diagne also had chances to double his tally at the other end, before Johnstone produced a stunning save in the 95th minute to deny Harry Maguire, the former United academy graduate at full stretch to tip the England international’s header onto the post.

West Brom be like "can we play the Big Six every week?" 🤪 pic.twitter.com/CFrEa7gEsG

The draw means United have now won just two of their last seven league games, and speaking afterwards, Solskjaer was questioned as to whether he felt West Brom’s goal should have been ruled out for a foul on Victor Lindelof.

“It’s something we knew would happen from the kick-off – we knew they’d put us under pressure and put in a few throw-ins. They put a cross in and the boy finished well,” the Norwegian told Sky Sports.

“As an ex-striker, I’d say that was a goal. But in a recent game [against Burnley], Harry [Maguire] got on top of a defender and that was [judged as] no goal. It’s just clarity and consistency. I’m not saying that’s a foul.

“The goal we scored is the way we put pressure on them. We did get down the sides sometimes but didn’t have anybody to tap them in. One of these days we weren’t there where we should have been.

“We should play better but we gave ourselves a tough start. You have 90 minutes to make amends but we didn’t build that momentum until late in the first half.”

The result moves United back up to second, but they are now seven points behind leaders Manchester City who will extend that lead to 10 if they win their game in hand over Everton in midweek. However, with United set to meet City on March 6th at the Etihad, Solskjaer refused to concede that his side’s title race was already run.

“I said we shouldn’t be talked about [in the title race]. A compliment for the boys we got into position we are now. We won’t let them [Manchester City] run away with it – we’re playing them soon. We’re not giving it away early – no we’re not.”

Next up for United is a return to European action, playing their Europa League last 32 first leg fixture against Real Sociedad in Turin, the game moved to a neutral venue due to Covid restrictions.

Bruno next? The four players to have led Man United for both goals and assists in a PL season