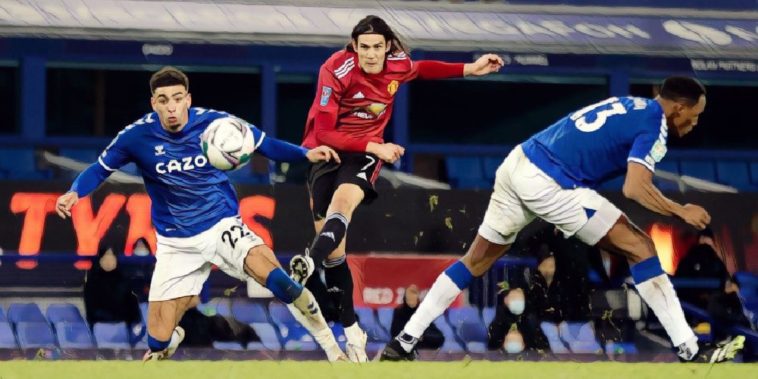 Manchester United progressed to yet another semi-final, leaving it late to beat Everton 2-0 at Goodison Park.

Much like their weekend hammering of bitter rivals Leeds, Manchester United started at a frantic pace, as they forced Everton into a number of mistakes at the back.

They were, however, unable to force an opening during their early period of dominance, with Carlo Ancelotti’s side finally getting a foothold in the game as the interval approached.

The second half was a much more passive and somewhat sloppy affair, though as has often been the case, Man United left it late to secure victory and subsequently book their place in the last four.

Anthony Martial dropped into space to pick up the ball, the Frenchman slipping it into the path of Edinson Cavani who had drifted out towards the right. The Uruguayan cut inside and unleashed a lovely effort from the edge of the box with his supposedly weaker left foot past Robin Olsen in the Toffees goal.

With five minutes of stoppage time added, Everton pushed forward in search of an equaliser to send it to penalties, though their late adventure only served to offer United three late chances, the last of which saw Marcus Rashford lead a counter-attack before laying it off to Martial who netted with virtually the last kick of the game.

Speaking afterwards, United boss Solskjaer admitted his side should have been out of sight following their ‘excellent’ start to the game.

“You never know what will happen in football, the first goal always changes games. As long as we were in the game I knew my substitutes could come on and make an impact, Luke [Shaw] has strength and power down the side so we tried to swap the dynamics of the game.

“Very good start the first 20-25 minutes we were excellent and should’ve been two or three goals up. They made a few good saves and then had a good spell just before half time but last 20 minutes or so we played well.

“It was cagey at times – there and back and flowing, attacking and defending but you’re always confident if it opens up a bit with the pace we have.

“[Edinson] Cavani should’ve scored three in the first half but he is a top striker, movement, quality and the goal was excellent.”

Man United made it to the semi-finals of the Carabao Cup, FA Cup and Europa League last season, yet failed to make it to the final of any competition.

The resulting draw saw them once again paired against Manchester City in a repeat of last season’s last four. When asked about his side’s chances of winning silverware, the Norwegian admitted a semi-final defeat was worse than losing in the final itself.

Who will progress to the Final? pic.twitter.com/tq1XJFt5iy

“We know that when we defend well we have players to win us the game, spirit in camp is good, winning gives energy and gives you a boost so we head into Boxing Day positive.

“A semi-final is sometimes worse than the final because it’s the worst possible time to lose a game and go out of the competition.”

Next up for the Red Devils is an early kick-off against top-four rivals, Leicester City, on Boxing Day.