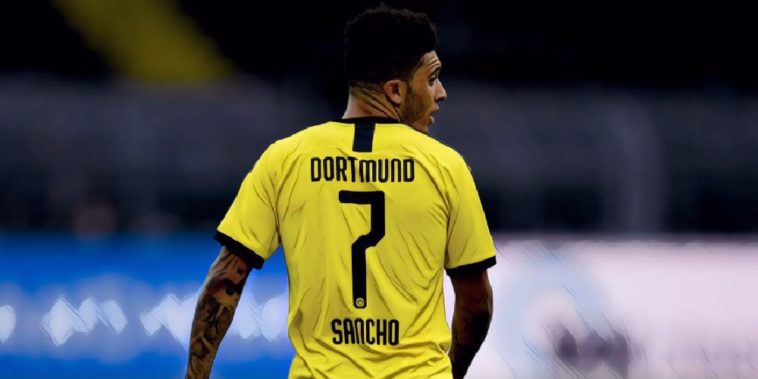 Sancho is set to sign for Manchester United after a deal was finally agreed with Borussia Dortmund, the two teams having an agreement over a deal that will cost an initial £73m with a further £5m in add-ons.

The deal marks the end of a protracted chase with the Red Devils having expressed an interest in signing the England international last summer, before failing to meet Dortmund’s British transfer record valuation.

Dortmund’s lowering of their demands this summer has now seen a deal struck that will take Sancho to Old Trafford and the Guardian are reporting that the winger has requested the number seven shirt – currently worn by Edinson Cavani who signed a new one-year deal earlier this summer – although ‘no decision’ has been made.

Sancho’s imminent arrival completes United’s number one objective for the summer transfer window, the Red Devils are set to remain active in the market with Solskjaer targeting a further three additions to his squad.

The Norwegian is keen to strengthen at centre-back, in defensive midfield and at centre-forward, with Pau Torres, Declan Rice and Harry Kane named as the leading targets in each position.

Torres is understood to have a release clause in his contract of around €60m (£50m) with the defender having attracted attention from across Europe, impressing as Villarreal beat Manchester United in the final of the Europa League last season.

The 24-year-old is currently with the Spain squad at Euro 2020, where La Roja will face Switzerland in the quarter-finals on Friday evening.

Rice has been a long-term target but has shown no indication he wants to leave West Ham, whilst Manchester City remain the front runners to sign Kane after the England captain informed Tottenham of his desire to leave in search of silverware.

United also retain an interest in England teammate Kieran Trippier with the club considering a move for the Atletico Madrid star to strengthen at full-back.

The club are also expected to announce the return of former academy graduate, Tom Heaton, on a free transfer from Aston Villa.

Read – France are out, but Euro 2020 has shown what Man United must extract from Paul Pogba