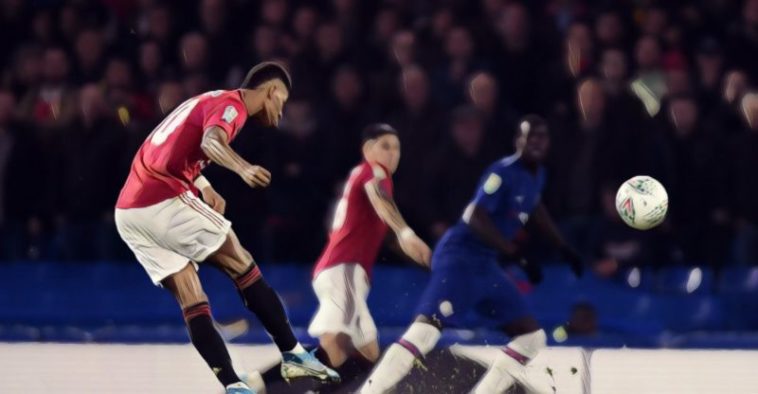 Manchester United’s mini-resurgence continued tonight, as they progressed to the quarter-finals of the Carabao Cup by beating Chelsea 2-1 at Stamford Bridge.

Frank Lampard’s in-form Blues side started brightly, but for all their sharp play in the opening exhanges, they struggled to create anything against a well organised United team that once again lined up with three centre-backs.

As the half wore on Ole Gunnar Solskjaer’s side began to grow into the game and they were handed the opportunity to take the lead in the 25th minute when Marcos Alonso clumsily brought down Red Devils attacker Dan James in the area.

Despite having missed two of the three penalty kicks he’d taken so far this season, Marcus Rashford stepped up and coolly slotted home past Chelsea ‘keeper Wily Caballero to send United in at the break 1-0 up.

Whatever Lampard said to his troops at the break seemed to work as the home side emerged full of energy and attacking intent, quickly pinning United back deep in their own half with a serious of sustained attacks.

The Blues would get the equaliser they deserved just after the hour mark when Michy Batshuayi beat Manchester United skipper Harry Maguire in the air before latching onto his own flick on and powering a fine strike past Sergio Romero from just outside the area.

A change to a 4-2-3-1 by Solskjaer seemed to allow United to regain something of a foothold in the game and both teams looked equally capable of snatching a late winner as the game entered it’s final stages.

It would be the heavily criticised Rashford who would steal the show and passage to the last eight, with the England striker smashing home a wonderous 35-yard knuckleball free-kick in the 73rd minute.

It was United’s third away win in the space of a week and speaking afterwards Solskjaer was delighted with his sides showing, picking out matchwinner Rashford and youngster Brandon Williams for particular praise.

“We’ve travelled a lot in the last week. We’ve got a good team spirit and camaraderie. It shows the character of the team,” Solskjaer told Sky Sports.

“We get the games where we want them. We’ve been leading 1-0 in many games and not kicked on. Today we were excellent, with fast flowing. That’s Manchester United. We’re trying to get back to that.

“Marcus has that strike in him. I’ve seen him in training so many times.

“When you give young lads the experience, like Brandon Williams got tonight – and the kid was outstanding – it’s only going to help them. We know we’re not the finished product, we’re a work in progress and keep trying to improve.”

Read: Rating each member of Manchester United’s fabled class on ’92