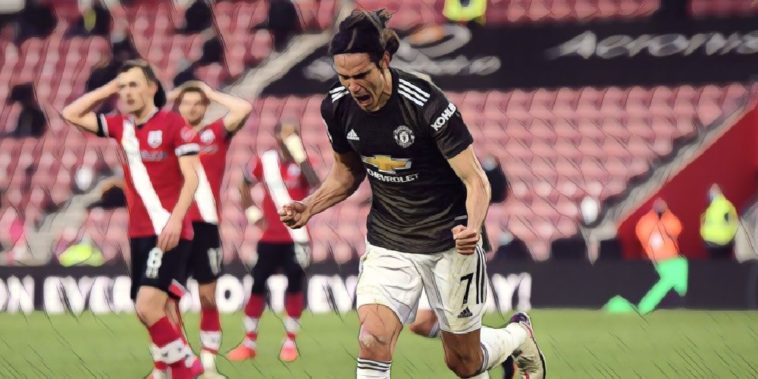 Edinson Cavani came off the bench to bag a brace and create another as Manchester United came from 2-0 down to beat Southampton 3-2 at St. Mary’s.

Manchester United started the brighter of the two sides, and really should have opened the scoring inside the opening 10 minutes. Youngster Mason Greenwood caught Jannick Vestergaard napping, stealing the ball and rounding ‘keeper Alex McCarthy but could only find the side netting from a narrow angle.

Southampton had struggled to deal with United in the early stages but grabbed themselves a lead after a pinpoint delivery from James Ward-Prowse’s corner, Jan Bednarek beating his man to glance his near-post header past David de Gea.

10 minutes later and Ward-Prowse once again demonstrated his supreme ability from dead-ball situations, curling an excellently placed free-kick inside the post, and while De Gea got a hand to it, he was unable to keep out the Englishman’s effort, the United number one injured in the process and being replaced by Dean Henderson at half time.

9 – Among English players, only David Beckham (18) has ever scored more direct free-kicks in the @premierleague than Southampton's James Ward-Prowse (9 – level with Frank Lampard and Jamie Redknapp). Technician. #SOUMNU pic.twitter.com/jIGTOUxfXS

Having wasted a number of chances throughout the game, United finally pulled one back just before the hour mark, half time substitute Edinson Cavani delicately picking out Bruno Fernandes in the box, the Portuguese allowed the time to take a touch and place the ball past McCarthy for his fourth goal in three games.

With 16 minutes still to play, the Red Devils hauled themselves level, and after Cavani had set-up Fernandes for the first, roles were reversed for the equaliser. A corner from the left eventually found itself at the feet of Fernandes, whose wayward strike deflected off a Southampton defender, with Cavani’s diving header pulling his side level.

Having piled on the pressure throughout the latter stages, Solskjaer’s side finally got their reward in the second minute of stoppage time, a well-weighted cross from Marcus Rashford finding another smart diving header from veteran goalscorer Cavani to complete the comeback.

Speaking after the game, Ole Gunnar Solskjaer insisted he was ‘calm’ at half-time, knowing that his side would create the necessary chances to overhaul the deficit.

“I was quite calm [at half time],” he told Match of the Day. “It’s about not conceding another goal and getting the next one. There was always going to be another one in that game. We must have had five or six clear-cut chances in the game today so it was about taking them when we got the chance. It worked.”

Speaking about the goalscorer Cavani, the Norwegian outlined what a ‘meticulous’ professional the Uruguayan has been since arriving at the club, the striker’s brace taking him to three goals in five Premier League outings.

“Great impact of course,” he said. “He is a number nine who wants to be in between the posts, he is always on the move, he wants to get in front of you and I am very pleased with him.

“On the training pitch, in the dressing room and during meal times, how meticulous he is… He knows what he wants to eat, how much he wants to recover – everything!

Edinson Cavani in the Premier League:

An unbelievable start to his Man Utd career. 💥 pic.twitter.com/oQsxUOHVMb

“It was top movement and his timing is fantastic. His hunger to get on the end of things is the key for a centre-forward. Sometimes it hurts and sometimes it doesn’t but to score you have to be in there.”

The win was United’s fourth on the bounce in all competitions, and Solskjaer was pleased to see his side’s character and mental strength in coming back from two goals down.

“It is a trait of Manchester United to never give in,” said Solskjaer. “Every single one of them, there was absolutely no chance they were going to give up. That’s a big thing for a Manchester United player and person.”

Next up for the Old Trafford outfit is a game against a crucial Champions League game against PSG before facing West Ham next weekend in front of 2,000 fans at the London Stadium.