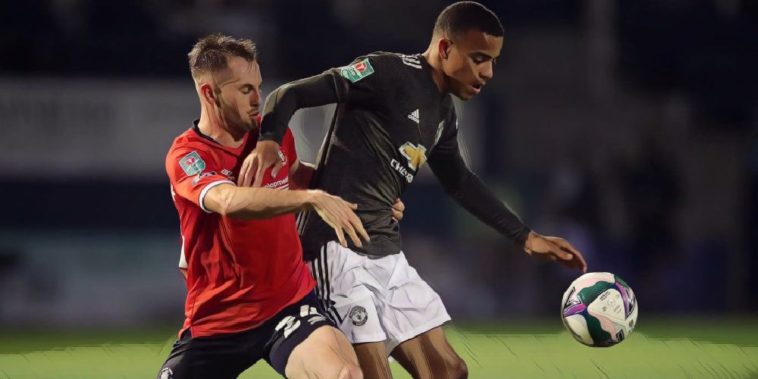 Ole Gunnar Solskjaer is convinced that Mason Greenwood’s long-term future is as a central striker despite the youngster’s impressive performances from the right-wing.

Greenwood burst onto the scene at Manchester United last season and scored 17 goals in all competitions to be named on the shortlist for the PFA Young Player of the Year, the joint-most prolific season of any teenager in the club’s history.

The 18-year-old has flourished from the right in a new-look forward line alongside Marcus Rashford and Anthony Martial last season, his displays earning him a first senior England cap against Iceland earlier this month.

Greenwood and fellow forward Rashford both got themselves on the scoresheet as United beat Luton 3-0 in the third round of the Carabao Cup on Tuesday night, with Solskjaer pleased to see the duo get up and running for the new campaign following a sluggish finish to last season.

“He had a fantastic season last season, and to get his goal now was important for him. And Marcus,” Solskjaer told MUTV. “It always is with strikers, to get that confidence and feeling of scoring, to get that hunger again. So I’m very happy with that, he just needs to work to get his fitness and sharpness back as well, as the rest of us.

“He can play through the middle as well. I think, as a young boy, not physically grown yet, it is nice to be facing forward rather than being the no.9, the foil; being the battering ram if you like.

The Norwegian also discussed Greenwood’s future development and believes the academy graduate must first improve his heading ability if he is to be deployed in a central position, the forward having missed the target with an unmarked, back-post header during the defeat to Crystal Palace last weekend.

“For him to be a number nine, though, he needs to learn how to head a ball. I keep telling him that and if he wants to do that he is welcome to come and practice with me.”