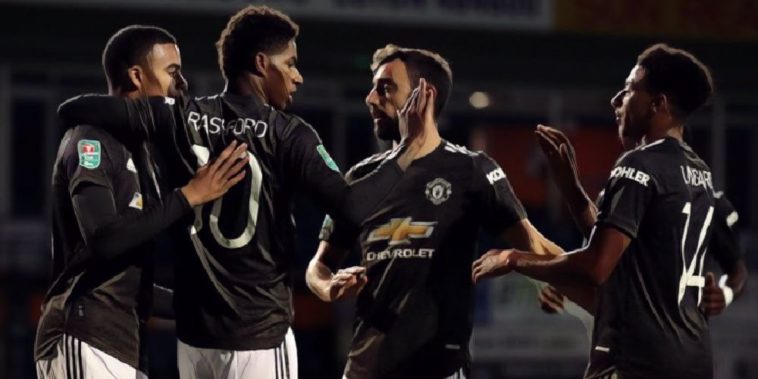 The Carabao Cup fixture at Kenilworth Road was the perfect way to quieten the doubters following Saturday’s underwhelming defeat to Crystal Palace, a result that saw fans and pundits alike quick to write off United’s chances this season despite the encouraging signs displayed at the end of last season.

Having made 10 changes from the weekend loss, the Red Devils were unsurprisingly not firing on all cylinders for much of the game, the 3-0 scoreline somewhat flattering Ole Gunnar Solskjaer’s side.

Juan Mata’s early penalty had put the visitors ahead at the end of what was a testing first period and United’s quality would shine out in the end, the introduction of Marcus Rashford, Mason Greenwood and Bruno Fernandes killing off the tie – the two Englishman grabbing a goal apiece late on.

Despite not being at their best, goalscorer and veteran midfielder Mata saw the victory as an ‘important win’ after such a shock start to the season – describing their performance as ‘professional’, which of course means ‘not at our best but we won’.

“It is one of those games where if you win you did what you had to do and if you lose it’s a mess,” Mata told Sky Sports. “We did a professional job today, we didn’t concede a goal, we scored three goals and we played some good football. It was important to win after our first game in the Premier League which we know wasn’t good enough.”

The game also saw young ‘keeper Dean Henderson make his senior debut for the club, and having had little to do for the majority of the tie, the youth product pulled-off an instinctive save late on to keep the tie at 1-0, before discussing the need to rediscover their previous rhythm.

“It was very important because it was 1-0,” Mata said. “He did a great save and somebody also cleared the ball on the line.

“I think we did OK. We have all not been training together for too long and now it is important to get the rhythm back and to get confidence. The confidence comes with results.”

With a number of Tuesday’s starters having played little football in recent months, Mata said that it much-needed run out in terms of fitness, physically as well as mentally.

“To be honest I felt fine and I think most of the guys felt OK. I think we did OK physically but for me it is very important in the mind – if you are confident and if you believe in what you are doing and get results then the body will follow.”

The Red Devils will play either Preston North End or Brighton and Hove Albion away in the next round.