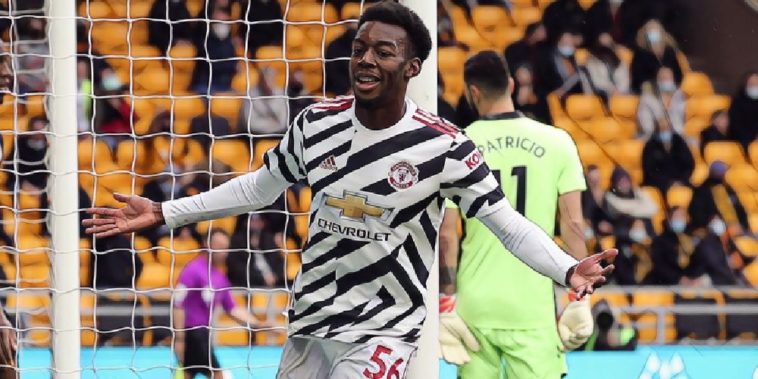 Manchester United rounded off their Premier League campaign with a 2-1 win over Wolves on what was Nuno Espirito Santo’s last game in charge of the Black Country club.

With second place already secure, and their Europa League final appearance on the horizon, Ole Gunnar Solskjaer made a raft of changes for their final day trip to Molineux, and the Norwegian saw his rotated side start the game brightly as teenager Anthony Elanga spurned a couple of early opportunities.

However, with 13 minutes on the clock, Elanga got on the end of a lovely cross from the left by Dan James, the 19-year-old arriving in the box to fire a superb bullet header beyond Rui Patricio for what was his first senior goal.

Wolves would however level the scores six minutes before the interval, Leander Dendoncker driving out of midfield before sliding the ball into teenager Fabio Silva. The Wolves record signing cut the ball inside to find the underlapping run of Nelson Semedo whose deflected effort found its way beyond Dean Henderson at the far post.

The Red Devils would however restore their lead on the stroke of half time, Mike Dean reviewing the footage of a challenge on Donny van de Beek before pointing to the spot, before Juan Mata stepped up to send Patricio the wrong way from resulting penalty kick.

Wolves would enjoy the majority of possession after the break, but were unable to break down Manchester United’s reshuffled defence, with Axel Tuanzebe making a number of vital blocks.

The win ensures that Solskjaer’s side finish the season unbeaten on their travels in the league, and speaking after the game, the United boss was ‘proud’ of his young team’s display, the Norwegian offering opportunities to the Amad Diallo, Shola Shoretire and handing a debut to Hannibal Mejbri.

“Very happy. Proud of them. They took the ball well, created chances and got the win they deserved,” he told BT Sport.

Asked about Elanga’s opener, Solskjaer backed the Swedish youngster to have a ‘bright future’, before praising his side’s away form this season.

“I am sure he will. He could have had two before and just being confident enough to get in there again, very pleased for him and he has a bright future ahead of him.

“Our home form then hasn’t been the greatest but what an achievement. To go a season undefeated away is something to be proud of.”

Veteran playmaker Juan Mata was given a rare run out, with some speculating that it could be the Spaniard’s final game for the club, and Solskjaer said the club are in discussions over his future.

“We are talking to Juan. It is a bit what he wants as well. I don’t give him enough game time but he such a professional and top quality. We will have a discussion.”

United now travel to the Polish city of Gdansk for their final game of the campaign where they take on Unai Emery’s Villarreal on Wednesday.