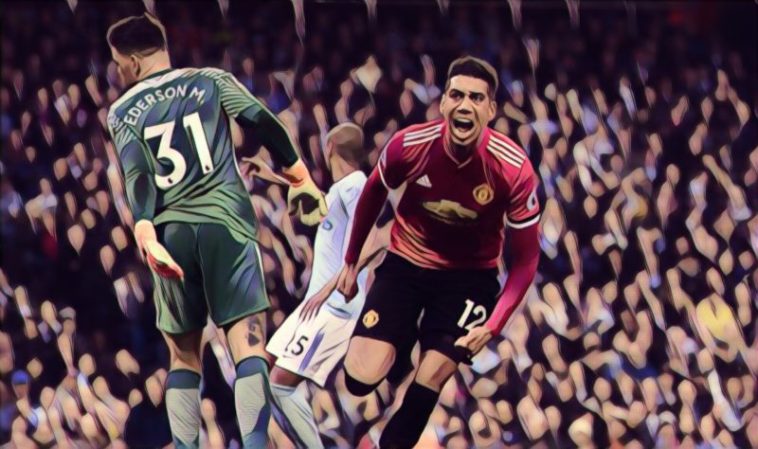 Manchester United centre-back Chris Smalling has admitted that a fear of looking like ”clowns,” and allowing their bitter local rivals Manchester City seal the Premier League title in yesterday’s Mancshester Derby at the Etihad, drove him and his team-mates on to stage a superb comeback from 2-0 down at half-time and emerge with a famous 3-2 victory.

The England centre-back had a shocking first 45 minutes in which he looked nervous in possession and the 28-year-old also badly lost City skipper Vincent Kompany from a corner for the opening goal.

However, United showed excellent character to fight back and win the game in the second half, and of course deny Pep Guardiola’s side the joy of claiming the Premier League crown in front of their own supporters.

The Red Devil’s record signing Paul Pogba scored a well taken brace early in the second period, before Smalling made up for his error in the first-half by volleying home an Alexis Sanchez free-kick on 69 minutes.

“The manager didn’t have to say much at half time as we knew ourselves as players it was a poor performance. He said that we didn’t want to be the clowns standing there watching them get their title.” Smalling told Sky Sports.

“City have been fantastic here all season, but we stepped up and won the game.”

“When you make a mistake you want an opportunity to make amends. You could see the relief after the first goal, and I am just glad to contribute.”