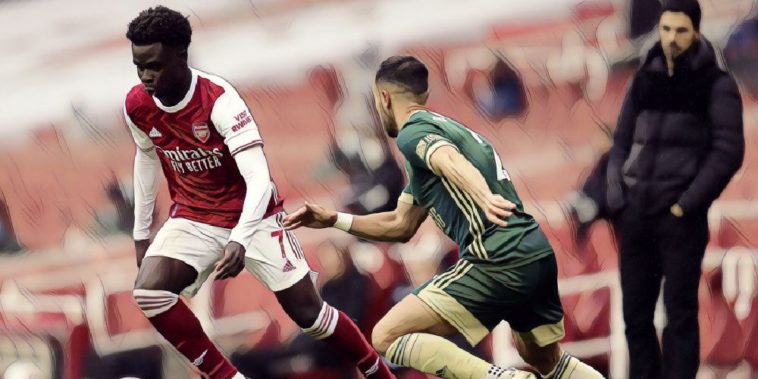 Bottom side Sheffield United host Arsenal on Sunday evening, with both sides in desperate need of a positive result at Bramall Lane.

Here’s all you need to know about Sunday’s meeting:

While the Blades still have eight games left to play this season, it would appear that relegation is now a matter of when rather than if, with there now being 15 points between themselves and Newcastle United in 17th following their defeat to Leeds in the Yorkshire derby on Saturday.

Despite only slipping to a 2-1 loss at Elland Road, Paul Heckingbottom’s side were largely outplayed for much of the 90 minutes, with Leeds’ wastefulness the major factor in the eventual tight scoreline.

That defeat now leaves the Blades potentially just two losses away from a seemingly inevitable drop into the second tier, following what’s been a dismal second season back in the top-flight after securing a top-half finish under Chris Wilder last term.

With Wilder no longer at the helm, the club now have a key decision to make over who will replace him in the long-term, as they prepare for life back in the Championship.

In the short-term, however, they will be seeking to do all they can to stave off the drop, for now, starting with a positive result against Arsenal on Sunday.

As for team news, defender George Baldock is a doubt after suffering a head injury at the weekend, although Sander Berge has an outside chance of making his long-awaited comeback this weekend.

The Gunners slim chances of securing a coveted top-four spot were all but ended on Saturday evening, as they slipped to a 3-0 defeat to champions Liverpool, following an abject display at the Emirates.

Mikel Arteta’s side had gone into the international break having rescued a point in a thrilling 3-3 draw with West Ham United, yet any sense of momentum from that game was seemingly lost as they were well-beaten by a Reds side who haven’t been at their best of late.

Second-half goals from Mo Salah and a double from Diogo Jota were enough to secure an extremely comfortable win for Jurgen Klopp’s side, with Arsenal‘s attacking unit, in particular, almost anonymous against their ‘Big Six’ rivals.

That loss has now left Arteta’s men languishing in tenth in the Premier League table, with ten points separating themselves and the Hammers in fourth, as they look set to miss out on Champions League football for the fifth season in a row.

The major issue for the north London club this season has been inconsistency, their inability to put together a sustained period of good form having held them back, as they now face a real battle just to finish in the top-half of the table, with Leeds United breathing down their neck in 11th.

As for their Europa League hopes, the Gunners were left ruing a handful of missed opportunities as a late Tomas Holes header snatched a draw for Slavia Prague in the quarter-final, first-leg tie at the Emirates.

Having a game against the league’s bottom side could be a welcome relief for the Gunners, while they should also be able to welcome back Bukayo Saka, Emile Smith Rowe and Granit Xhaka after they all sat out Saturday’s loss. On a less positive note, however, influential defender Kieran Tierney could well be out for the season after picking a knee injury at the weekend.

The two sides last met early on in the current campaign, the Blades going into the match having lost their opening three league games, all of which they had failed to score in, while the Gunners had won two of their first three league fixtures.

Despite that contrasting form, it was a tightly-contested affair at the Emirates, with the hosts struggling to break down a stubborn Sheffield backline in the opening period, while they were perhaps fortunate not to see David Luiz given his march orders, after a blatant pull back on Oliver Burke went unpunished.

The home side did eventually make the breakthrough on 61 minutes, Bukayo Saka heading home from a fine Hector Bellerin cross, before Nicolas Pepe added a second just three minutes later with a composed finish into the bottom corner.

The visitors then set up a nervy finish with just seven minutes to go, David McGoldrick netting his side’s first goal of the campaign in fine style, although it ultimately proved in vain as the Gunners hung on for victory.