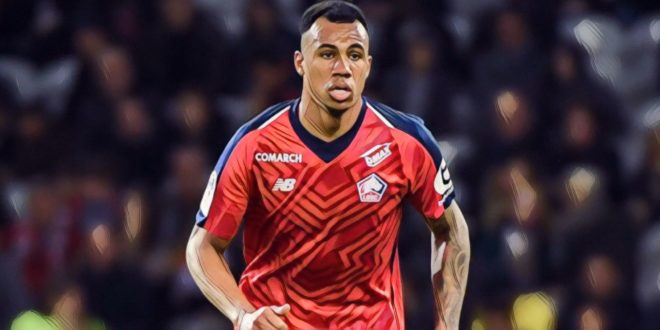 Lille centre-back Gabriel Magalhaes has been linked with a number of Premier League sides this season, having impressed for Lille under Christophe Galtier.

The left-footed defender is powerful in stature, relatively quick over the ground and a useful distributor, which are all traits that have attracted clubs around Europe.

With Manchester City, Chelsea, Arsenal, Manchester United, Tottenham Hotspur and Everton all likely to be on the lookout for a left-sided defender, Gabriel’s name is likely to fill even more column inches in England come the summer. But what is it that sets the Brazilian apart from his peers?

Here, we analyse his key attributes and unpick why the 22-year-old Brazilian has become so sought after…

At 6ft 3in, Gabriel has the natural size to dominate his opponents aerially and while this is by no means a solid indicator of him being a good defender, it is a good starting point. At Lille, Gabriel is the primary defender when it comes to competing in the air, averaging 5.1 aerial duels per 90, more than either of his defensive partners Jose Fonte and Tiago Djalo. Of those duels, the 22-year-old has one 3.4 per 90, which is a far better success rate than either of his partners.

For comparison, Virgil Van Dijk and Harry Maguire have won 4.9 and 4.6 aerial duels per match respectively, although with only a marginally better success rate. In the offensive third, Gabriel has not yet put his size to great use and has only registered two goals for Lille since he arrived in 2017. He is averaging 0.6 shots per game this season, taking 11 shots so far.

On the ground, Gabriel is also a capable tackler and has stopped dribblers from progressing past him on 74% of occasions. This is a better tackle success rate than that of Maguire, Caglar Soyuncu and David Luiz, while he has completed more tackles than both van Dijk and Jan Vertonghen. His displays in Ligue 1 have shown him to be comfortable covering out wide, and he is capable of running with attackers moving into the channels. He has also made 23 interceptions in 18 starts, although a concern might be the fact that this is the first time he has made more than 15 appearances in one season since arriving in Europe.

However, despite his inexperience and youth Gabriel has become a leader in this Lille side, taking on a range of defensive responsibilities. In addition to his aerial activity, he averages more blocks and clearances per 90 than any other player in the squad and has played the fourth most minutes for the French side.

Often alongside his older partner Fonte, Gabriel is clearly tasked with being the more aggressive player, with his speed used to cover for the Portuguese player’s relative lack of mobility. Lille are ranked 12th in Ligue 1 in terms of xG allowed, but third in terms of xG created, so attack remains their strength, but as we will now analyse, this is another area of the game the Brazilian contributes in.

As a team, Lille tend to favour medium and short passes, over long ones, although long diagonals are certainly an attribute Gabriel possesses. Currently, Galtier’s side rank fifth for short passes and seventh for medium passes, but sit 11th in terms of the number of long passes completed. Within this system, Gabriel is their most common passer, averaging 61.1 passes per 90 so far this season, at a completion rate of 81.7%. He is not as accurate a passer as Fonte, but he is also tasked with much of Lille’s ball progression.

A potential draw back to Gabriel is his reliance on using his left foot, with only around 5% of his successful passes coming with his right. However, given the abundance of right-footed defenders, this should not be too much of a concern, with his accurate left peg providing a valuable passing angle from the back.

A relative unknown until this season, Gabriel has been impressive in his first year as a guaranteed starter at Lille. While he is strong in the air and a decent tackler, the Brazilian’s distribution from deep is perhaps his best attribute and the key reason he has been identified by top sides. Defenders that can progress the ball are becoming increasingly sought after and the fact that he can do it from the left makes him even more valuable.

Despite attracting interest from clubs during the January window, it was probably for the best in terms of his development that he remained with Lille as he is still a fairly inexperienced player. If the Brazilian can keep up his strong performances and build on some of the weaker areas of his game, he should be more prepared for a move if it comes in the summer.

With Eden Hazard, Gervinho and Nicolas Pepe all moving to the Premier League from Lille in the past and Boubakary Soumare also linked, there is a well trodden path for Gabriel if he wishes to move to England this summer. For now though, the young Brazilian’s priority should be looking to finish off the current season as well as he can.