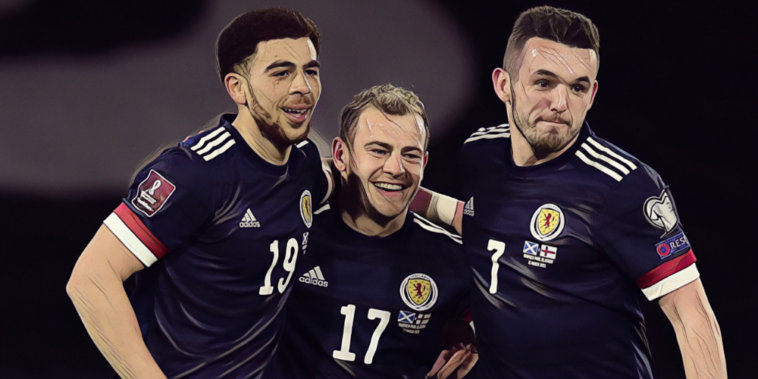 Since Che Adams’ commitment to the Scotland in March 2021, Steve Clarke has had the unenviable task of selecting a strike force which will complement our three at the back system, which relies upon players in attack who can keep hold of the ball and make the most of our chances when they come.

Throughout the qualifying campaign the favoured option has been one up top in Lyndon Dykes. The Aussie-born striker has proven that club form is not always the best indicator of how well a player can play for their country.

Albeit his performances for QPR were improving towards the end of the Championship season. With six of Dykes’ twelve league goals in the 2020/21 season coming in the final four weeks of the season.

Despite his lack of goals during the early part of the season, Dykes still performed at the highest level when pulling on the Scotland jersey and has become an invaluable part of Steve Clarke’s approach to games.

The headache really comes when trying to decide which player(s) will complement Dykes in attack.

Amongst our options is the in-form Kevin Nisbet, who ended the season as the Scottish Premier League’s second leading goalscorer behind Celtic’s Odsonne Edouard.

Nisbet’s dynamic movement, strength on the ball and deadly finishing may prove vital at Euro 2020. However, given Nisbet has only made appearances for Scotland off the bench, it is unlikely that we will see the forward handed his first start for Scotland in the opening game.

Another option to play off Dykes is James Forrest, who was a huge miss to Celtic this season due to injury, though given his lack of football and minutes on the pitch, Forrest may be better placed coming off the bench if we need to inject a bit of pace and directness into our game.

The next option, which to many Scotland fans and pundits alike is the favoured option for the Euros, is to play Lyndon Dykes in a two alongside Southampton’s Che Adams.

Adams is a fast and strong player who can stretch defences, which for Scotland, could prove vital in the games ahead. With both Dykes and Adams in attack for Scotland we will likely see play being focused more down the middle of the park in transition.

However, against the Czech Republic this may not be the best approach.

Czech Republic have several standout players which we need to keep in mind, specifically the likes of Patrick Schick, Vladimir Coufal and the in-form Tomas Soucek.

One area which has served West Ham well this past year has been the forward runs of right-back Coufal, who registered seven assists in the Premier League last season.

So what we need to consider from a Scotland perspective is how we can shut him out of the game altogether.

Which leads me to our final option in attack for the opening game, Ryan Fraser. The Newcastle winger was a Steve Clarke favourite in the qualifying campaign and played a key role in the Israel games and, perhaps most notably, in our last game against Czech Republic.

Fraser scored the only goal in our 1-0 victory against the Czechs at Hampden in October 2020, with Lydon Dykes bagging the assist.

What Fraser can offer Scotland is a player who can hug the touchline, play on the last man and make direct runs off the striker. With Coufal playing right-back, this is perhaps even more important as a player like Fraser will likely force Coufal to stay back.

Similarly, in the defensive phase, Fraser is more likely to pick-up any late runs made by Coufal than our other options such as Adams, who will play more like a conventional number nine.

The major concern when it comes to the selection of Ryan Fraser is the lack of football he has played at club level this past twelve months.

However, even when Fraser scored his vital goal against the Czechs in October last year, his only ninety minutes of football for Newcastle in that period came against Newport in the Carabao Cup.

Whilst the lack of football may be a negative, it certainly does not rule out Fraser from contention to start in our opening game. Both options have their positives, and they will both give us a great chance.

However, the Dykes-Fraser link has been tried and tested and proven to work very well, especially against our upcoming opponent.

Despite Che Adams form at club level and impressive performances for the national side in recent weeks, I do not think we can look past Ryan Fraser for the upcoming game and everything that he can offer us.

It is satisfying to know that we have so many great options to choose from and regardless of who Clarke opts to go with, we have a real opportunity of taking the three points in what will be our biggest game in decades.